Striking workers at IT company Fujitsu services braved snow, ice and sub-zero temperatures to hold pickets today, on the first of five days of national strike action over jobs, pay and pensions.

One of the biggest turnouts was in Manchester where around 30 strikers joined a spirited picket line. The workers covered the area in Unite union placards and kept busy – and warm – by building a shelter out of snow.

Unite rep Lynne Hodge told Socialist Worker, “We were very impressed at the hardiness of the strikers who got to the picket – it shows how determined we are to win this dispute.”

Meanwhile over in Crewe, more than 20 union members joined the picket line – an increase on the number picketing during the one-day strike in December.

Strikers reported that they turned away some of those who were planning to go in, although not many people were even attempting to get in to the building.

There was also a big success in Belfast, where around 30 to 40 strikers gathered outside the company’s offices in Holywood Road. The pickets turned away a post van, a catering van and a vending machine supplier.

Unite rep Roger Dane said, ‘Fujitsu made £199 million profit last year, are forecasted to make £110 million this year and yet they have still decided to freeze the wages of their employees and not give them any sort of pay rise.”

This afternoon, the pickets were planning to build on their success by holding a demonstration outside another Belfast site.

One of the local union reps talked about how the company had made record profits, but then upset employees by freezing pay and attacking jobs and pensions. These attacks have led to union membership doubling at the site, he explained. This picture, other reps say, is reflected nationally.

In Wakefield, the Unite member who had the placards and other picketing equipment was delayed for two hours by snow, but strikers still mounted a presence outside their building.

In Solihull in the West Midlands, four strikers braved the bitter cold to picket their workplace. The strikers said they were picketing to make a show of strength – and to say the union is right to make a stand.

At all the sites, Unite is holding members’ meetings during the strike to discuss where the dispute is up to and to make sure all members are involved in the decisions about where to go from here.

One of the keys to victory will be building solidarity with other groups of workers – and in many areas the Fujitsu strikers are already organising to speak at other union meetings and workplaces to raise funds and publicity.

Steve Warren, a Fujitsu Unite rep from London, was among those going out to raise support today. He told Socialist Worker, “We have been to speak to Unison union members at Tower Hamlets council and we are on our way to talk to workers at Tower Hamlets College.

“We got an extremely good response from the council workers – it was a pleasure to speak to them. They made a donation to our strike, and are following it up with a message of support.

“They said that the attacks we are fighting over are going to hit them with the next government. That’s one reason it is so important that we win this dispute.”

The Fujitsu workers are striking again on Friday of this week, and on Monday, Thursday and Friday of next week.

For more information go to » www.ourunion.org.uk 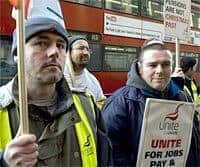 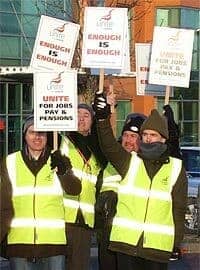 Fight for jobs, pay and pensions 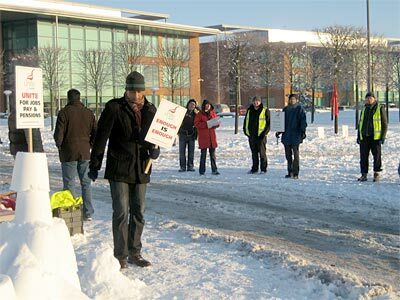