This article is over 17 years, 4 months old
Firefighters at Glasgow international airport — all members of the T&G union — began an indefinite, all out strike last Saturday over health and safety.
By Dave Sherry
Downloading PDF. Please wait...
Saturday 05 February 2005

Firefighters at Glasgow international airport — all members of the T&G union — began an indefinite, all out strike last Saturday over health and safety.

They voted 52 to seven for action to stop the British Airport Authority (BAA) cutting the firefighting service they provide.

Despite a BAA scabbing operation involving senior fire officers and other personnel from BAA sites throughout the UK, the strike stays solid with round the clock picketing. Pickets told Socialist Worker that BAA is jeopardising safety at an airport that has doubled in size and traffic volume over the last few years.

Donald Munro, T&G regional organiser says, “This is about the safety of airport users.

“We have been forced into strike action by a management that is not prioritising safety.”

Scotish Socialist Party MSP Tommy Sheridan has promised to raise the issue in the Scottish parliament.

BAA bosses are determined to reduce staffing levels with a two person fire safety team based in the terminal building. The crew will not be equipped with protective clothing or equipment to carry out any fire fighting duties.

It means that the fire fighting capability within the airport will no longer exist.

Instead it will depend on local authority firefighters providing the service. That means response times will increase from two minutes to at least 14 minutes.

“Hotel, shop and service staff are delivering food for the pickets and tanker drivers have been respecting our picket lines. We attended a meeting with the Scottish FBU and we got a good response. The local authority fire fighters support our stand and are concerned at the safety implications.”

The T&G is demanding that the BAA withdraws its plans. Offers of money to accept the cuts have already been rejected by the strikers.

The BAA attack has implications for every airport and all airport unions need to rally round the Glasgow strikers.

T&G UNION members on Glasgow underground struck on Monday and began a ban on overtime.

They plan further stoppages in their dispute over pay and holidays. 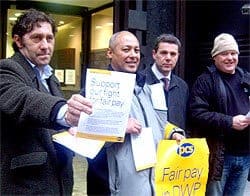