Industrial and political news in brief

Protest against police taser use

The pre-inquest hearing into the death of Jordan Begley took place on Friday of last week. Jordan died after being tasered by police in Greater Manchester last year.

Members of his family demonstrated outside Manchester Town Hall to question the police use of tasers.

Cops are bidding for anonymity during the inquest.

Over 80 free travel campaigners gathered in Sheffield on Wednesday of last week for a picnic before marching to lobby a council meeting.

The Barnsley freedom riders were set to meet with Northern Rail and the South Yorkshire Passenger and Transport Authority this week.

Traffic wardens in Ealing, west London, were set to strike for 24 hours on Thursday of this week against a miserly 1.5 percent pay offer.

No tickets are to be issued as part of the action, which involves more than

50 wardens in the Unite union employed by contractor NSL.

This could cost the council up to £25,000 in parking ticket revenue. The workers previously struck over pay last year.

Festival for justice for Palestinians

Haringey justice for Palestinians is organising a culture festival in Tottenham, north London.

It is due to begin on Thursday of next week at 7pm, and events will continue until next Saturday.

There will be talks, film showing, books for sale and music. Admission is free.

For more information go to hjfp.org.uk/wordpress

The trial of the officer who shot and killed Azelle Rodney in Edgware, north London, in 2005 was due to begin on Wednesday of this week.

Azelle’s family and supporters are asking people to join them at a protest outside Westminster magistrates’ court to demand an end to deaths in custody.

Fights to come on London Underground 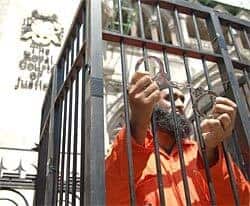 No pearl in this oyster