Anti-racists plan to gather in solidarity with Sheku Bayoh's family outside the inquiry on Tuesday
By Charlie Kimber
Downloading PDF. Please wait...
Saturday 21 May 2022 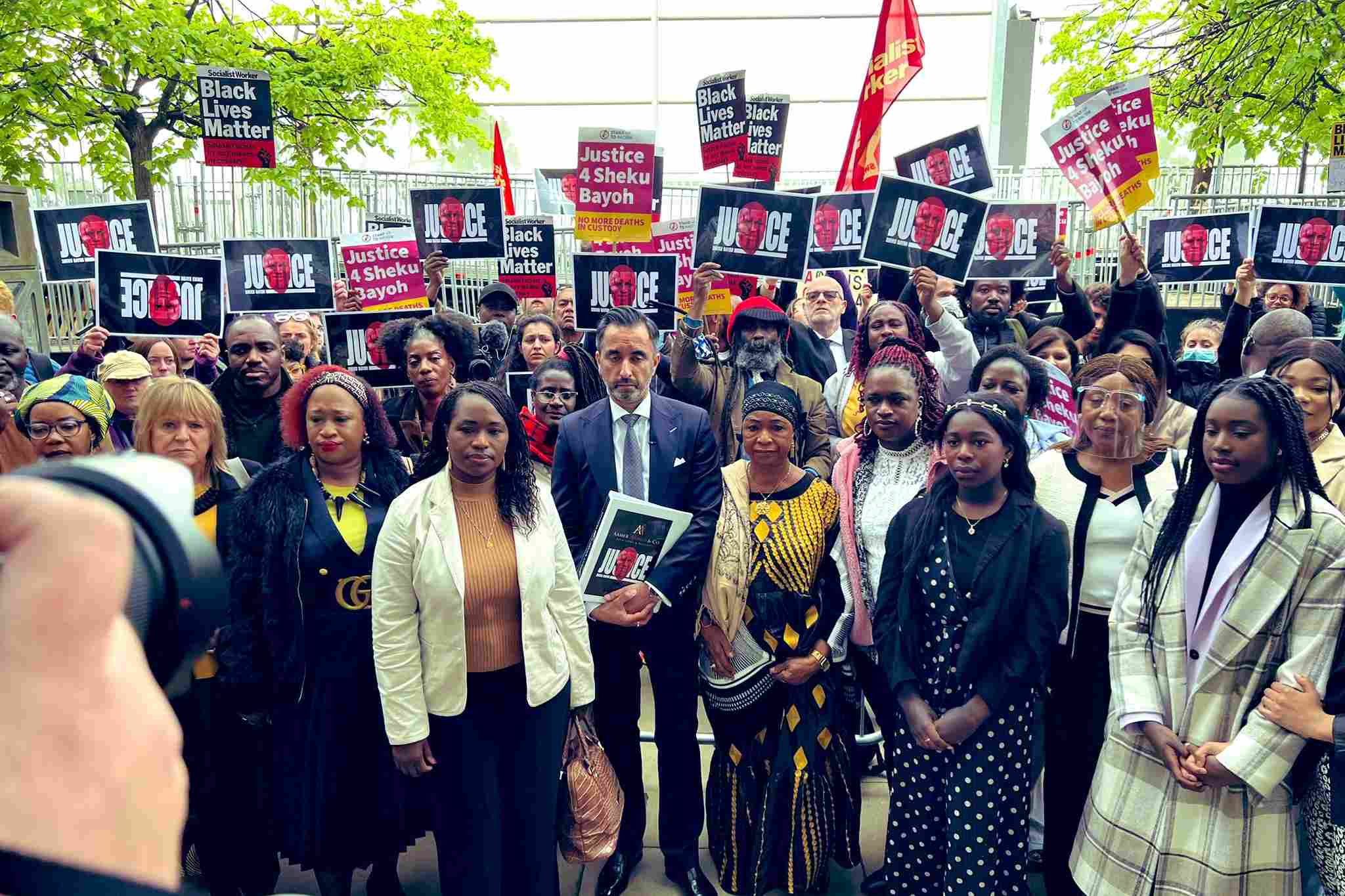 The Bayoh family, Aamer Anwar and supporters outside the inquiry

An inquiry into the death of Sheku Bayoh after contact with the police has heard powerful testimony about the cops’ actions. Bayoh died in hospital in handcuffs in May 2015 in Kirkcaldy, Fife. He had multiple injuries after being hit with police batons, and being shackled and held on the ground by numerous officers.

His body was covered with over 24 separate lacerations, cuts, bruises, and he had a broken rib. Bayoh’s family believe he died from positional asphyxia because of the tactics used by police, who they allege over-reacted and were motivated by racial bias.

Following intense campaigning by his family and supporters, an inquiry into his death is being held in Edinburgh headed by Lord Bracadale, a senior judge. One officer involved in Bayoh’s arrest admitted on Thursday that police fired CS spray and pepper spray at him without warning, even though he made no direct threat and did not show any weapons.

PC Craig Walker was one of the first cops to confront Bayoh after police received calls from the public about a man with a knife on the streets. No bladed weapon was ever found.

Walker said he considered running Bayoh over in a police vehicle when he arrived at the scene. Instead, he shoulder-charged him to the ground after claiming he saw him chase a colleague, strike her to the ground and stamp on her.

Angela Grahame QC, counsel to the inquiry, questioned Walker about what happened when he and another officer, Alan Paton, first arrived.

The inquiry heard that Paton, who has yet to give evidence, told Bayoh to “get down on the fucking ground”. And that, without warning him, sprayed CS gas towards Bayoh’s face.

“So when the spray was used at that point, he is not acting aggressively, there’s no sign of a knife, he is not attacking PC Paton,” Grahame said to Walker. “He’s walking, effectively he’s just simply ignoring the comment from PC Paton. Is that right?”

Walker confirmed there was no knife visible on Bayoh. He admitted that Bayoh was walking along the road “in a calm-ish manner” but had been non-responsive, and had a “thousand-yard stare”. He told Grahame, “We weren’t taking any chances.”

Bayoh family solicitor Aamer Anwar tweeted after the day’s evidence, “PC Craig Walker admits at public inquiry police fired CS spray and pava spray at #ShekuBayoh even though he made no direct threat, didn’t  show any weapons, was found to be unarmed, hit with batons, shackled and  held on ground by up to 7 officers and died.”

On Friday Walker said he had never come across any examples of racial discrimination at Kirkcaldy Police Office or heard racist jokes or comments.’ Walker said that descriptions of Bayoh that fellow officers had used, such as “deranged with superhuman power,” amounted to “perception”. He also told the inquiry he was not aware of any negative stereotypes about black men in the criminal justice system.

Bayoh family QC Claire Mitchell asked whether any of the following might be racist stereotypes. “I kept thinking about the Lee Rigby boy, the soldier who was killed”. “I cannot emphasise the strength of this guy”. “He was massive and is the biggest male I have ever seen”. “I’ve never seen a more frightening crazy man in my life. I could see he was completely out of control”.

Walker admitted some of these were not accurate. Sheku Bayoh was 5 foot 10 inches tall. The first two police at the scene were both 6 foot 4 inches tall. One was 25 stone, twice Bayoh’s weight. The most common answers during the questioning of Walker were ”I don’t remember”, “No recollection,” “I’m not sure.”

Bayoh’s family says he is “Scotland’s George Floyd”. Zahid Saeed, who had known Bayoh for nearly 15 years, said near the start of the inquiry that Bayoh was “murdered” by police officers.

Anti-racists, including Stand Up To Racism supporters and trade unionists, have gathered repeatedly in solidarity with the Bayoh family’s call for justice outside the inquiry. They will be there again on Tuesday.

This could be the end of this phase of the inquiry. The inquiry continues, and the public calls for justice are very important. 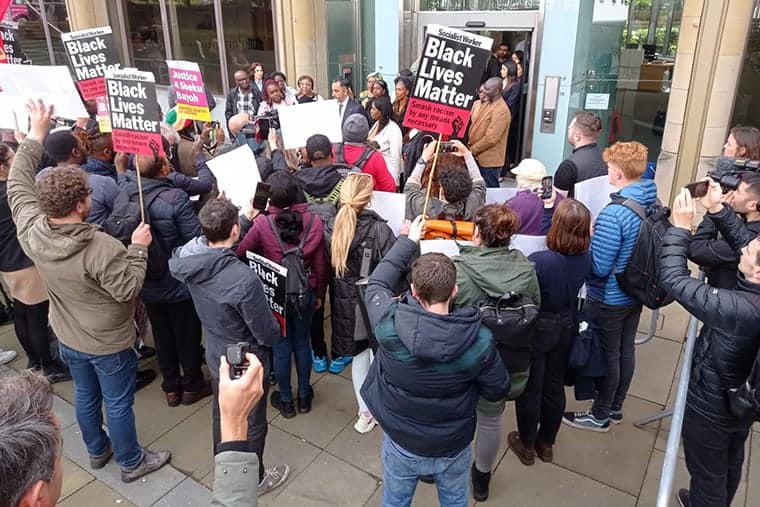