A crucial battle is coming at London Metropolitan University (London Met) over jobs and union rights.

Amanda Sackur, chair of UCU London Met coordinating committee, said that university governors had approved plans for up to 60 redundancies – mainly compulsory – in three departments, with increased workloads for those who avoid redundancy and more redundancies on the horizon.

Barry Jones, UCU London Region assistant secretary, said that London Met was the only college in the country to refuse to accept the existing recognition agreement and to consult with UCU.

This includes a call to boycott the university unless our existing recognition agreement is honoured and compulsory redundancies ruled out.

The meeting also received support from London Met Unison on behalf of non-academic staff. Jeremy Corbyn MP told the meeting that he and John McDonnell MP have tabled an Early Day Motion on our situation. We also received a pledge of support from George Galloway, our other local MP.

Several speakers pointed out that there seems to be no justification for management’s drastic moves, especially when similar jobs to those earmarked for redundancy are being advertised in other departments.

The meeting passed a motion calling for management to open the books to public scrutiny before any redundancies. The meeting also agreed a “multi-track” approach to the dispute.

This will include moving as fast as possible to a ballot on industrial action including strike action, calling demonstrations to attract publicity and support, pursuing all possible legal routes, and initiating a political campaign to bring the behaviour of London Met’s management and governors to the widest possible audience.

These actions will proceed alongside the declaration of an international academic boycott of London Met.

We have already had a massive amount of support. Over 1,400 people have signed the online petition to our governors launched last week. Please get your workmates to add their names.

There will be a demonstration at 12 noon on Wednesday 11 July outside the Tower Building on Holloway Road (opp Holloway Road tube station), London. Please send a delegation and message of support. For more details contact: [email protected]

Parents say no to free schools 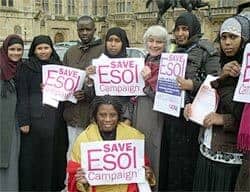 Speaking out on Esol language cuts