This article is over 16 years, 7 months old
Workers employed by Metronet on the infrastructure of London Underground have voted by 78 percent for strikes against outsourcing.
Downloading PDF. Please wait...
Saturday 10 December 2005

Workers employed by Metronet on the infrastructure of London Underground have voted by 78 percent for strikes against outsourcing.

A three day walkout was scheduled from 21 December as Socialist Worker went to press. There were signs that Metronet, which runs two thirds of the tube infrastructure under New Labour’s Public Private Partnership (PPP) scheme, was looking to negotiate.

At the heart of the dispute is Metronet’s attempt to transfer work to other contractors and turn itself into a commissioner of work rather than a provider.

This would turn the PPP into the full scale privatisation unions warned of if deputy prime minister John Prescott pressed ahead with the scheme.

One effect would be attacks on the pensions and conditions of hundreds of workers employed by Metronet. Tube drivers have also been balloted for action short of a strike.

That will give them additional protection if they feel it is unsafe to drive on days when Metronet track inspectors and repair teams are on strike. In a separate dispute, station staff are voting for strike action over management reneging on the implementation of key parts of a deal to deliver a 35-hour working week.

The RMT is also balloting workers on the Docklands Light Railway after the company cut a pay offer from 3.4 to 3.2 percent. 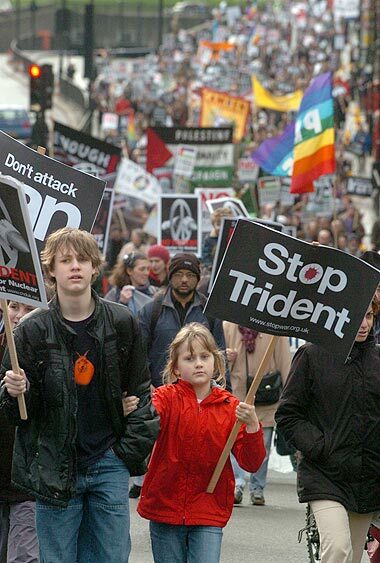 Pictures of 24 February Troops Out demo in London (1)