The TUC called the mass demo. The People’s Assembly has organised a number of protests and events over the next three days of the conference.

Mark, a Unison union member from London, summed up the mood of defiance on the protest. He told Socialist Worker, “We’re here to tell the Tories that austerity and attacks on our unions are not acceptable.

“We are not having it anymore.”

The large Unison and GMB union blocs were still forming up as people from London were arriving.

Saad Ali, a refugee from Somalia, marched with the Stand Up to Racism bloc. He told Socialist Worker, “I went through civil war, my family being kidnapped and ransomed. I just want to support my fellow human beings.”

Many people came to defend workers’ rights and the right to strike.

Hiten Vaibya, a GMB member from Wembley, told Socialist Worker, “We came with about 90 people from our union branch – that’s because we need to oppose the Trade Union Bill.” 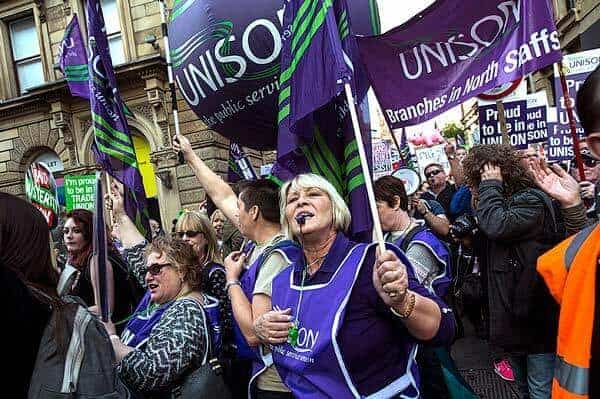 Unison union members were among those leading the protest (Pic: Guy Smallman)

The Tories want to ram the bill through before Christmas, but protesters were optimistic about beating back the attack. Hiten said, “The Tories want to take us back to the 1980s, but they just don’t get it. Look at this crowd – the times are changing.”

Unite and Unison union contingents led the dense crowd as the march snaked through Manchester.

Homemade placards and banners were dotted among giant union balloons. Matthew marched with a placard that said, “The only good Tory is a suppository”. He told Socialist Worker, “I’m from a working class background and I’ve seen the effect of austerity.

“This is about removing the Conservatives – not just putting pressure on them or trying to persuade them or find one or two with a heart.” 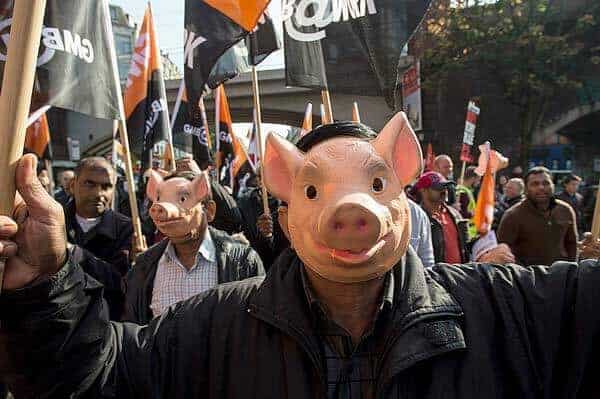 On the march in Manchester (Pic: Guy Smallman)

Demonstrators jeered loudly and chanted, “Tories Out” and, “Tory scum, here we come” when they caught a glimpse of the conference centre.

Katy added, “He’s a man of principle, but he needs to stick to those principles and not try to be all things to all people.

“We need to keep up our resistance.”

PCS union general secretary Mark Serwotka told a People’s Assembly rally at the end of the demo, “I’m proud that at the head of this march we had National Gallery strikers.

“There are some people who say strikes will never work. But they’re going back to work on Monday with the London Living Wage and guarantees that their terms and conditions won’t be eroded.

“And union rep Candy will lead them back because she got her job back.”

Singer Charlotte Church added, “This is not a radical fringe. This is a growing social movement. Protest has worked, does work and will work for us now.”

Michael Byrne is a Unite rep at Coventry City council. He said, “It’s great to see so many people here – it shows you people are prepared to fight.”

Activists agreed about the need to keep up the fight against austerity and the Trade Union Bill. 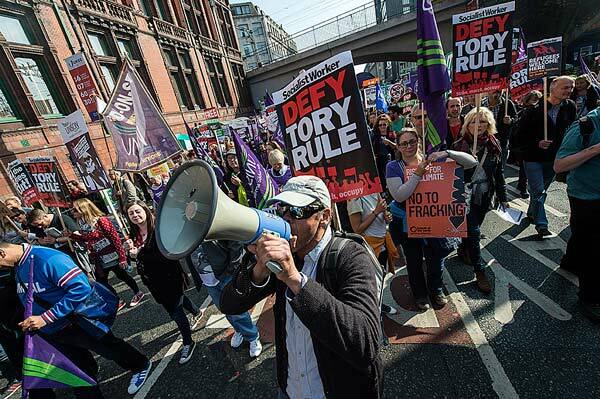 Fury at the Tories on the streets of Manchester (Pic: Guy Smallman)

PCS rep Candy Udwin addressed a Unite the Resistance rally of over 450 people after the demo. Today is the National Gallery workers’ last day of their all-out strike.

Candy said strikers felt “privileged” to have received solidarity from other workers during the dispute.

The strike has won Candy’s reinstatement after bosses sacked her earlier in the year, and protected workers’ conditions.

“If we can do it, anybody can do it,” she told the rally. “The only reason they are attacking us is because they’re scared of us.” 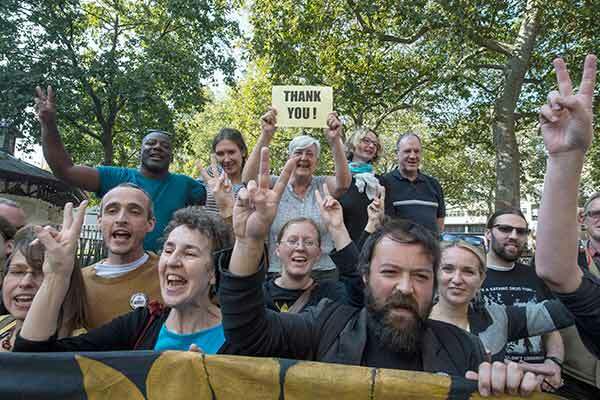 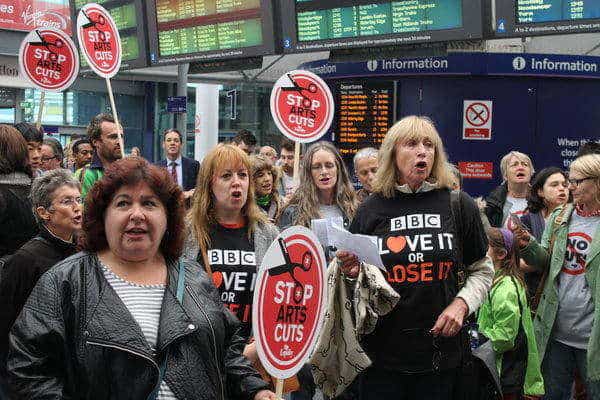