This article is over 10 years, 5 months old
Miriyam Aouragh is the co‑author of Collateral Damage, a report into the response to the Norway attacks. She spoke to Socialist Worker
Downloading PDF. Please wait...
Tuesday 09 August 2011

“When the news of the Norway attacks came out most people’s first reaction was deep shock. Whatever the context, the massacre of so many young people in cold blood was horrific.

But the first reaction of many commentators and the media was to rush to put the attack into a preferred political framework.

In our research on the aftermath of the attacks we studied the flood of online assertions about who the perpetrators might be. In the first 48 hours, media sources clamoured to denounce ‘Muslim extremism’.

Their blind assumptions, in the face of a vicious attack by an anti-Muslim terrorist, reflect how deeply rooted Islamophobia has become.

Even where reporters stuck to the facts, a more insidious message was seeping through.

It was that this massacre was, if not directly attributable to Muslim perpetrators, then somehow the responsibility of a tolerant immigration policy.

It is dangerous to suggest that unease about immigration is legitimate.

It leaves the mantra about a ‘native resentment’ that continues to actively fan the flames of right wing parties across Europe unchallenged.

Muted, throughout, was the fact that the attack had been carried out by a right wing racist.

It is downright terrifying to think about what would have occurred had the perpetrator been Muslim.

So we cannot assume that the attack has exposed the danger of the far right and that will simply be enough to stop the rise of racist ideas.

Where I live, in Oxford, most people respond very positively to our local Unite Against Fascism campaigning.

But five days after the massacre one man came up, looked me in the eye and said, ‘This country doesn’t need Muslims, they are evil.’

There are consequences of allowing official politics to give credibility to racist ideas—of the mainstreaming of Islamophobia.

The response to Norway is a warning. We need to see it as a call to action.”

See the data at www.bit.ly/pAMyXH 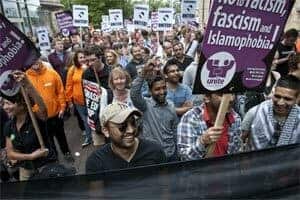 ‘Thousands will stand up to the racist EDL’