This article is over 14 years, 1 months old
Uniting under the banner of "Save Our Livelihood", around 7,000 British Chinese, Indian, Bangladeshi, Pakistani and Turkish catering employers, workers and supporters gathered in Trafalgar Square in central London last Sunday to protest against Britain’s draconian immigration rules.
By Hsiao-Hung Pai
Downloading PDF. Please wait...
Tuesday 22 April 2008

Uniting under the banner of “Save Our Livelihood”, around 7,000 British Chinese, Indian, Bangladeshi, Pakistani and Turkish catering employers, workers and supporters gathered in Trafalgar Square in central London last Sunday to protest against Britain’s draconian immigration rules.

The demonstration was organised by the Ethnic Catering Alliance in opposition to the government’s new point-based system and its impact.

Under the system, points will be awarded based on educational qualifications and English language skills. This will prevent many skilled catering workers from entering Britain.

Workers report that the introduction of the system is being accompanied by a nationwide crackdown on “illegal working”, which is sweeping across the country, driving them out of work and depriving them of their means to survive.

Jabez Lam, coordinator of Chinese Immigration Concern Committee (CICC), told Socialist Worker, “Every minority ethnic community including the Chinese is being criminalised in the process. The ethnic catering trade – particularly the small catering family businesses – is under attack.”

Hundreds of ethnic catering businesses are reported to be facing possible closure. Many more are laying off workers.

A recent report into skills shortages in Chinese catering by the CICC found that 400 workers were laid off in February alone, and the number is on the increase.

The job losses and closures are forcing migrants into even more insecure work.

Zhong, a kitchen porter who just lost his job and has resorted to selling DVDs on the street, told Socialist Worker, “I hear of raids every week from friends who are working in restaurants.

“Despite fear, I carried on working until I got laid off. My three children rely on my earnings to go to school in Fujian.”

He now makes just £30 a day from selling DVDs.

Mr Shen, from Shandong province of north China, said the policies are ruthless. “The raids are getting ever more speedy and widespread.

“They are aimed at workplaces all over Britain.

“Chinese people – with or without immigration papers – get picked on by the police on the street. They ask for your ID even if you are British-born – let alone migrant workers like me.

“They are raiding workplaces even in small, remote villages. They are everywhere! No place is safe.

“Many of my friends lost their jobs that they’ve had for a long time. My boss decided to close down and four of us lost our jobs. We were left with no housing and little cash.”

It is the immigration policies of British governments over the years that have increased employers’ dependence on undocumented labour and worsened the terrible conditions many are forced to work in.

Since the 1980s there has been a labour shortage in the Chinese catering trade.

As it was difficult to recruit from abroad, employers began to look locally to fill the shortage.

They found an existing pool of Chinese workers already living (mainly undocumented) in Britain – workers desperate for jobs and willing to accept whatever terms and conditions were offered to them.

Many of these workers have had their asylum applications have been turned down but who can’t be deported as they have no papers.

They are cruelly treated by the New Labour government – offered no state support and are not permitted to work.

Instead of breaking down this enclave of sub-standard working conditions by enforcing employment rights and opening borders, the government is instead using its new system to further restrict the entry of workers from outside the EU while cracking down on illegal working.

Ethnic-catering employers are putting their last hope on the list of occupations with skill shortages set to be presented by the Migration Advisory Committee by the end June 2008.

Meanwhile migrant workers in the industry are confronted with the immediate issues of homelessness and destitution.

A Chinese worker who has been recently sacked told Socialist Worker, “I’m desperately looking for work now, but really, regular work like in the restaurants and takeaways is all gone, for good.

“And I don’t want to go back to working in the factories and on the farms – those jobs don’t even pay you enough to cover your rent.

“All we’ve got left is the casual jobs on the building sites.” 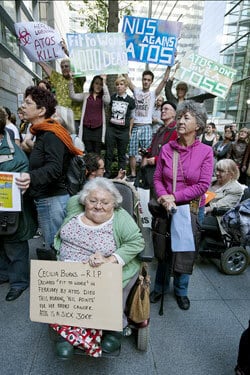