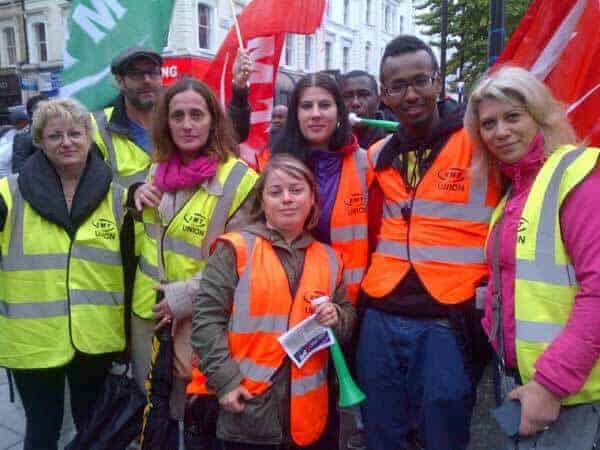 Around 250 cleaners working for Mitie on First Great Western trains struck today, Friday, for the second time to win £8.55 an hour.

Cleaners at the London Paddington Station picket line spoke to Socialist Worker about their work and why they can’t back down.

Her colleague agreed, he said “When our pay’s gone up it’s only by two or three pence so we’re standing up for £8.55—to begin with.”

The workers who are in the RMT union also want overtime rates and extra for bank holidays and Sundays. They are very angry at not getting sick pay.

Another told Socialist Worker, “I had an accident at work and damaged the ligaments in my hand”, a cleaner explained, “and I didn’t get any sick pay—my manager kept saying, ‘wait till next month’.

“For five weeks I had no pay. It’s taken months to get better but I had to go back to work. I have my daughter at home in and I can’t last so long without pay.”

Workers say they often don’t get paid for all the work they have done. And if unpaid hours are lumped together and paid at once then they get taxed too much.

Many are on zero-hours contracts despite being promised a permanent contract after three months work.

Workers said that management threatened cleaners on zero-hours with no more work if they struck. But they went out on strike anyway.

Pickets were out today across the network at Old Oak Common Depot in west , , , , and .

The train cleaners also want to get rid of companies such as Mitie so that they can be directly employed by the rail operating companies.

They plan to strike for at least two days next time with the date to be decided after this weekend.

Another striker added, “The company knows the money is very bad, they have made millions, why don’t they thank us for the work?

If this doesn’t work we should strike for three or five days.”