National Gallery strikers and supporters protested in central London today, Thursday, as they handed in a petition to gallery bosses and Tory culture minister Ed Vaizey.

The petition calls for the National Gallery to remain a public service and for the Culture, Media and Sport Select Committee to review the running of the gallery. Over 133,000 people have signed it.

Some 100 people gathered outside the gallery in Trafalgar Square to hand bosses a copy of the petition.

They then marched down Whitehall to the Department of Culture, Media and Sport to hand in another copy addressed to Vaizey.

The protest came on the gallery workers’ 80th strike day in their fight against privatisation – and the 23rd day of their all-out strike.

Bosses outsourced 300 jobs to private security firm Securitas last month. But the PCS union members responded with an indefinite walkout, which has closed at least half of the gallery’s rooms.

Workers are striking to maintain their terms and conditions before Securitas takes over in November.

They have proven that they are determined keep fighting. And the fact that tens of thousands of people have signed the petition shows they have huge support.

Trade unionists and campaigners have joined the strikers’ daily picket lines – and made vital donations to the strike fund.

And Guardian newspaper columnist Polly Toynbee joined the protest to hand the petition to gallery bosses.

Toynbee said, “The idea that staff could be outsourced to a supermarket car park the next day is disgraceful.

“Public sector workers have a public sector ethos – outsourcing them is never the right thing to do.”

“The national executive will continue to support the dispute at the National Gallery and I’m sure we’ll be able to raise it at this month’s TUC conference.”

The huge petition will help pile the pressure on new gallery director Gabriele Finaldi. Talks between Finaldi and the PCS are ongoing.

Bosses sacked PCS rep Candy Udwin on trumped up charges of “gross misconduct in May.

Candy told the protest, “We are pleased that we have some talks progressing here at the gallery – that is a big step forward.

“If Dr Finaldi thought that it was all going to be over, I’m afraid he got it wrong. We’re still here – we’re still out.

“We’re still fighting against the privatisation but also for guarantees for the staff and for my reinstatement.”

She added, “The responsibility for the mess that is the National Gallery – the demoralisation of the staff and the anger at how it is run – lies with Ed Vaizey.

“The green light for the attacks on our union and victimisation of our reps comes from this government.”

“We do think that this is politically motivated. We’re pretty sure that the privatisation was about attacking our union and our rights.

“But it hasn’t stopped us from fighting. We are going to stay out until we win.”

Go to the picket lines, every day 9am-11am 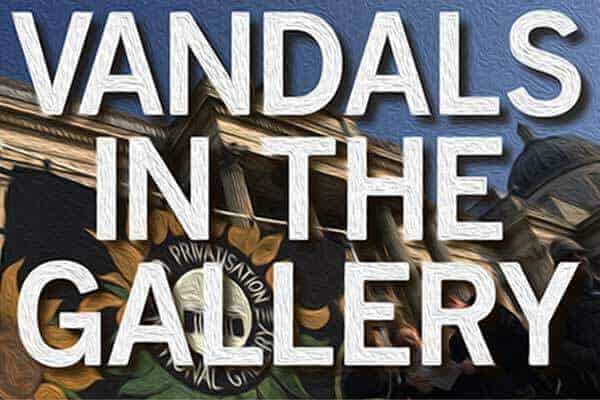 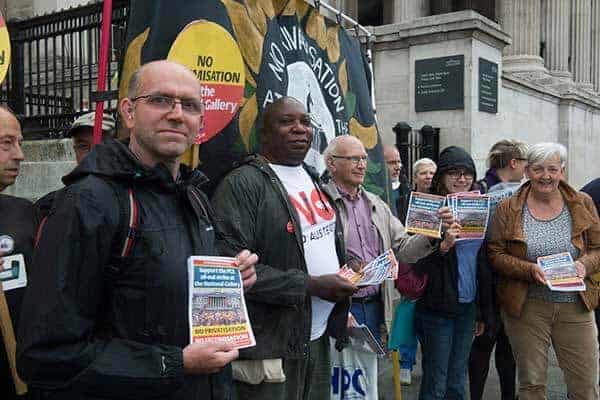 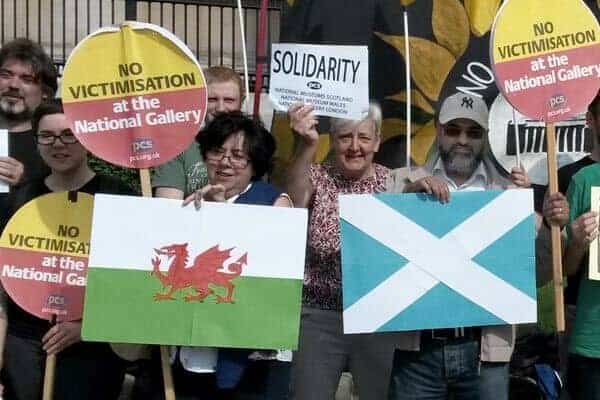