After picketing and rallying in the morning they staged a lively demonstration to his office at Getty Images in central London.

Getty is the multimillionaire chairman of the National Gallery which is pressing ahead with plans to privatise 400 out of 600 staff. It doesn’t even pay its workers the London Living Wage.

The walkout was the second five-day strike in a battle to stop the privatisation plans. On the eve of the first walkout last month bosses suspended leading PCS union activist Candy Udwin in an attempt to undermine the action.

But outside Getty’s offices to cheers she told strikers and supporters, “We have given a message to Mark Getty – this is not the end. We are going to go on fighting until we get them to see sense.”

The attacks on workers and the union has provoked outrage.

Director Ken Loach has issued a statement to the staff saying, “Everyone is entitled to a Living Wage. Shame on the National Gallery for refusing to pay it.

“It’s the gallery’s management that should be kicked out, not its dedicated workforce. Victimising a trade unionist is the tactics of the bully – reinstate Candy Udwin.”

He said, “This is two battles now. We need to see Candy reinstated for her hard work and commitment to this cause.

“And we will not deviate until we have a deal that saves the gallery and saves Candy.”

The dispute has the potential to grow in size. The Prospect union also has members in the National Gallery, and they confirmed they would be sitting down with all the unions represented in the gallery on 5 March to talk over the proposals.

Thursday’s rally and march was part of a day of action which saw solidarity events take place across the country.

The TUC general council were among many who held up signs calling for an end to privatisation plans and for Candy to be reinstated.

Thousands of pounds ha also been donated across the country, with one of the latest being a £500 donation from Unite members at Barclays bank in Northamptonshire.

And Candy and strikers joined the firefighters’ protest at parliament on Wednesday.

As Candy told the rally on Thursday, “We will take more action if we have to. But we’re asking everyone who supports us is to give us the backing.

“That support means we can go on fighting. But it also means that we know that there are people out there who don’t want to see what this government is doing. It isn’t just the privatisation at the National Gallery – we need a movement that says public services for people, not for profit.” 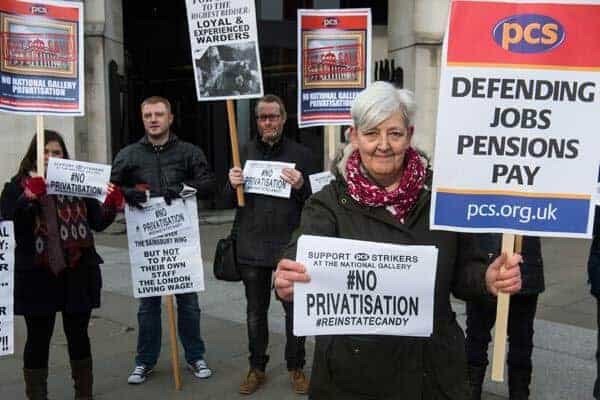 National Gallery workers defiant as they begin a fresh walkout