This article is over 20 years, 2 months old
\"The fact is that, whether the government likes it or not, the people of this country remain distinctly unconvinced that bombing the hell out of Kabul will stop Bin Laden carrying out more atrocities.\" Those words were part of a Mirror editorial on Monday of this week which voiced growing doubts about the war.
Downloading PDF. Please wait...
Saturday 03 November 2001

‘The fact is that, whether the government likes it or not, the people of this country remain distinctly unconvinced that bombing the hell out of Kabul will stop Bin Laden carrying out more atrocities.’ Those words were part of a Mirror editorial on Monday of this week which voiced growing doubts about the war.

The same issue ran a front page headed ‘This War Is A Fraud’ by anti-war journalist John Pilger, who was also given two pages inside to make the case against it. The Daily Record front page the same day read ‘The Innocent’, and had a heart-rending picture of a father weeping over the bodies of seven children killed by a US bomb.

The previous Friday the Guardian’s editorial consisted of a string of questions challenging the course of the war. All these papers stopped short of opposing the war outright. But they reflect deep worries about it and the way the government is trying to clamp down on dissent.

The Mirror lashed Blair for suggesting that those who criticise the war lack ‘moral fibre’, and foreign secretary Jack Straw, who accused sections of the press of suffering a lack of ‘humility and memory’ for questioning the bombing. The Mirror said, ‘What a damn cheek, particularly coming from a party so steeped in a lack of those two qualities itself. The Mirror has plenty of humility and memory, thanks, Mr Straw. And we have plenty of moral fibre too, thanks, Mr Blair. But we also have plenty of questions we’d like answering if that’s not too much trouble. And no amount of sneering from our government will stop us asking them.’

Jack Straw has tried to dismiss this by claiming the media is going through what he calls a ‘Kosovo wobble’, comparing the criticisms to those that developed three weeks into NATO’s bombing campaign against Yugoslavia in 1999.

Buried away in the Independent on Friday of last week was a piece on the first US ground attack in Afghanistan a fortnight ago. This received positively reverential media coverage at the time. The supposedly left of centre Observer reported breathlessly:

‘The stronghold of Baba Sahib never fell to the Russians. It was a byword for invincibility-but it fell to the Rangers in a single attack.’ The Independent’s report paints a rather different picture:

‘The attack was meant to be a purely cosmetic exercise for the media and the public, against a relatively safe and poorly defended target. But there had been a failure of intelligence, and the troops from the elite 75th Rangers Regiment ran into such heavy fire on the ground near Kandahar that they had to beat a hasty retreat. A Chinook helicopter airlifting them out lost its undercarriage and had to make a forced landing.’

The Independent went on to quote a ‘senior defence source’: ‘The intelligence had been quite clear that the target near Kandahar was pretty easy to take out. But what the Rangers discovered was that the Taliban force were fighting back quite hard. The enemy regrouped very well, and their counterattack was such that the Rangers made a tactical withdrawal. That’s when the Chinook got into difficulties and lost its undercarriage. Some of us were surprised that such senior US figures are surprised at the tenacity of the Afghans. They have been fighting for the last 20 years.’

The US suffered another setback last week when the Taliban captured and executed Abdul Haq, one of the leaders of the guerrilla war against the Russians in the 1980s. It seems that the CIA were hoping that Haq, who comes from the same Pushtun ethnic group from which the Taliban draw their support, would be able to undermine their core base in southern Afghanistan.

Apparently the US sent a Predator armed drone in an unsuccessful attempt to rescue Haq from the Taliban. Intelligence consultants Stratfor commented, ‘This is possible-and if true would decrease the already low perception of US abilities in Afghanistan, as trying and failing to extricate an operative is more embarrassing than not even trying.’

Against the background of these setbacks, recent Pentagon and Ministry of Defence briefings are probably accurate when they predict a winter of small-scale but fierce ground raids. Plans to deploy British marine commandos fit in with this prognosis.

Many military experts argue that British elite troops are better trained in close combat than their American counterparts, who are over-reliant on high-tech weapons. The commandos will be like the British army’s own Ghurkhas-expert killers in imperial service.

A long, drawn-out war is very bad news for the pro-US regimes in the Middle East and Central Asia. The massacre last weekend of Christians in the eastern Punjab is an indication of how the Afghan war is feeding the militancy of Islamist sectarians. General Pervez Musharraf, the Pakistani military dictator, may enjoy basking in the international attention he has received since 11 September.

He is also quite happy to pocket the Western aid that has been flowing into his coffers. But the longer the war goes on, the greater the political threat to his regime. Between 25 and 30 percent of the Pakistani army are reported to be supporters of the radical Islamists. On Friday of last week Musharraf called for a ‘short and targeted’ military campaign against Afghanistan.

The Saudi royal family are in a similar plight. Last week the FBI confirmed that a majority of the 11 September hijackers were Saudis. There are persistent reports that the Saudi authorities are resisting American demands for cooperation in tracking down al-Quaida supporters in Saudi Arabia. The connections go too deep into the elite. George W Bush and his loyal British ambassador Tony Blair face the real danger that a war waged to reassert American imperial power will in the end further weaken it. The stakes in this conflict are very high indeed.

Manchester remembers all those killed in Afghanistan 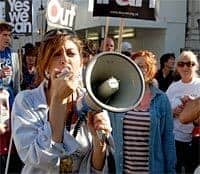 Bloody toll of Afghan war causes splits in US