No pain for the richest in Osborne’s unequal Britain

This article is over 9 years, 8 months old
The rich refuse to pay for the crisis—and now the chancellor is ramping up his war on the poor, writes Siân Ruddick
Downloading PDF. Please wait...
Tuesday 04 December 2012

The Office for National Statistics released figures this week that show that the top 10 percent of households own an astonishing £4.5 trillion.

This is the economy that George Osborne presides over. The Tory mantra has been to cut, cut, cut for the two and a half years they’ve been in office.

They have used the crisis to try to restructure Britain’s public services to become profitable for private companies—and to drive down workers’ wages and conditions.

They are selling off public services to private companies and giving “competitive” tax rates to multinationals.

Now public anger is mounting at the global giants that pay barely any tax in Britain while we’re told there’s no money for schools and hospitals. Google, Starbucks and Amazon have all been exposed as paying next to nothing on their monster profits.

Starbucks has made over £3 billion of sales in the UK since 1998, yet has paid just £8.6 million in tax. The company diverts sales money as royalty payments to a sister company in the Netherlands.

This has left the UK arm reporting losses. The firm courted further fury when it announced that it is cutting staff sick leave, maternity pay and lunch breaks.

In 2011 Amazon made £3.35 billion in UK sales, yet amazon.co.uk reported a UK turnover of just £207 million. It paid just £1.8 million tax. Amazon operates, completely legally, out of Luxemburg. Yet most of its economic activity is in the UK, where it has more than 15,000 staff.

UK Uncut activists were set to target over 30 Starbucks branches across Britain this weekend to highlight its tax avoidance and its attacks on workers’ rights.

Osborne claims the government is going to “get tough” on big companies and their tax arrangements. But the Tories are slashing the number of people working for HM Revenue and Customs (HMRC) which collects the tax.

The PCS union that represents HMRC workers says some 10,000 posts are being slashed. It is almost impossible to chase big companies and start new investigations.

George Osborne’s economic policy has led to a double-dip recession and an almost non-existent recovery. Government insiders have been forced to admit that he won’t reach the targets he set for paying off the deficit by the end of the coalition’s term.

They attack benefit claimants, workers and services. They have presided over the highest levels of youth unemployment since comparable records began. But while the jobs disappear, unemployed workers are forced to work for free in workfare schemes.

It’s been clear all along that austerity isn’t fair. Now it’s clear that it only works for the rich.

Osborne: Bonanza for bosses, cuts for the rest of us 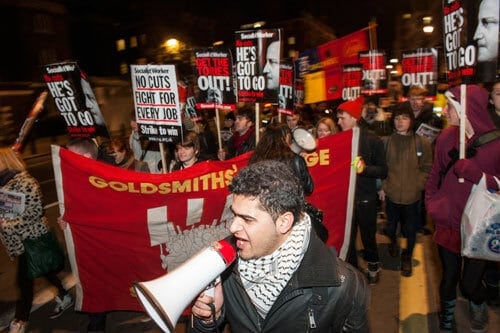