This article is over 9 years, 6 months old
Teachers at Noel Park Primary School walked out today (Thursday) against plans to turn their school into an academy.
By Sadie Robinson
Downloading PDF. Please wait...
Thursday 12 July 2012

Teachers at Noel Park Primary School walked out today (Thursday) against plans to turn their school into an academy.

Local trade unionists, parents and children joined the NUT union members on their picket line in Haringey, north London. They brought banners and food for the strikers. And workers at nearby West Green Primary School sent a card in solidarity.

Noel Park is one of several schools that Tory education secretary Michael Gove wants to forcibly turn into an academy. The Academies Enterprise Trust plans to take over.

“They tell us that they’re not a business,” said striker Rodwell Leslie. “They say they’re not looking to cream off money from schools.

“Then we get told that more money will be put into the school if it becomes an academy. But we don’t know if any of these things are true.”

Catherine Osborne, another picket, agreed. “It’s the unknown that we’re worried about,” she said.

Strikers described feeling “totally ignored” during the consultation process. More than 90 percent of parents voted against the academy plans and the vast majority of school workers oppose them too. Yet the head teacher is pressing ahead.

Striker Ines Ruiz said, “What really upset me is that they didn’t take us into account. It was just announced that we’re going to become an academy. If I wanted to work for a private company then I could have chosen to. But I don’t.”

Dave Gilchrist is the NUT union rep at Noel Park. “We’re told not to worry because nothing will change if our school becomes an academy,” he said.

“But if that’s true, why change it? We’ve had around 45 messages of support from Brighton to St Helens. Lots of people oppose academies.” 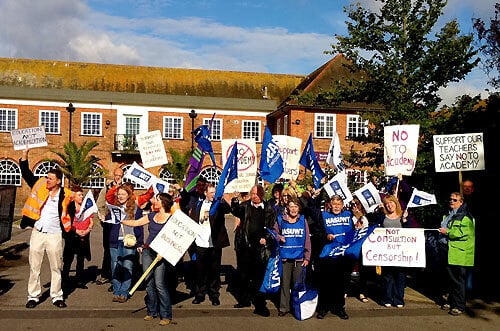