This article is over 12 years, 6 months old
After months of small victories and some setbacks, sometimes a single day sees a campaign jump to a new level. A strike by NUT union members at Norlington School in Leyton, east London, on Thursday of last week was such a day.
By Mike Barton, Leyton Triangle campaign
Downloading PDF. Please wait...
Tuesday 07 July 2009

After months of small victories and some setbacks, sometimes a single day sees a campaign jump to a new level. A strike by NUT union members at Norlington School in Leyton, east London, on Thursday of last week was such a day.

Since the beginning of the year a local campaign, Leyton Triangle, has been bringing together teachers, parents, residents and sports clubs to fight proposals from Waltham Forest council to merge five of the borough’s schools into two new trust schools.

These trusts will take the schools out of local democratic control and hand them to private organisations.

One of the new schools will be built on Leyton cricket ground. The irony is, of course, that Waltham Forest is an Olympic borough.

Thursday’s strike was solid with over 20 teachers on the picket line – at a school with around 30 NUT members.

Kevin, an NUT rep at the school, said support on the picket from local residents and trade unionists completely strengthened their resolve to take further action.

Strikers met the UCU union rep at the Institute of Education, which is set to run one of the trusts and where the UCU branch recently voted to boycott the trust.

They discussed how best to campaign.

Other strikers took part in a flying picket, travelling to George Mitchell School, another of the schools that would be merged into the trust.

In the evening, union and campaign activists met at the cricket ground to discuss how best to continue the campaign. Representatives from some of the sports clubs that use the ground joined the meeting.

As the local paper organised a photo shoot with activists and members of the boxing club, we were joined by footballers and kickboxers.

They talked about how, 20 years ago – before the council started overcharging for facilities and the clubs became run down – the ground would have been buzzing with young people.

The teachers plan to strike again on Thursday next week. 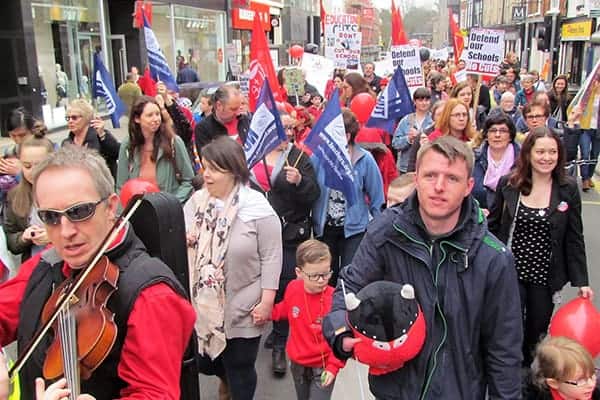