This article is over 13 years, 6 months old
Up to a 100,000 job centre workers, coastguards, driving examiners and other government workers are set to strike alongside council workers.
Downloading PDF. Please wait...
Tuesday 01 July 2008

Up to a 100,000 job centre workers, coastguards, driving examiners and other government workers are set to strike alongside council workers.

Mark Serwotka, leader of the PCS civil service workers union, speaking at the Glastonbury music festival, accused government ministers of spending too much time talking to millionaires rather than ordinary working people.

“We keep being told to tighten our belts and accept below inflation pay rises but there is nothing left to tighten,” he said.

The Department for Work and Pensions, the Transport Department and the Home Office are some of the government departments likely to be involved.

The union is in dispute with the government in 18 departments.

Many of these struck on 24 April alongside teachers and lecturers, and the PCS has argued the need for co-ordinated action of different unions to increase the pressure on the government.

The PCS group executives meet this week to discuss calling out their members alongside Unison strikers.

The PCS is also to ballot all its over 250,000 members in the public sector over striking against below-inflation pay offers. 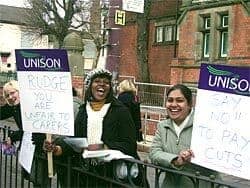 Thousands of workers to fight the public sector pay freeze

Action will put Open in the bunker