Activists across Britain are campaigning for a big turnout at a national demonstration against the Tories in London later this month.

The People’s Assembly campaign group has organised a march for health, homes, jobs and education on Saturday 16 April.

It comes as the Tories are in crisis, fighting with each other over the European Union and plans to force all schools to become academies.

A large protest on 16 April would help to build these fights.

In Newcastle, the People’s Assembly has helped to initiate a protest with the junior doctors’ BMA organisation this Saturday.

Newcastle activist Simon Hall explained how the march has drawn in support from many other campaigns and trade unions.

He said, “The march is called under the banner of Save our NHS—Support the Junior Doctors, and will be led by them. But it’s spilling out into other areas.

“The march will also have a teachers’ bloc organised by the NUT union. And it’s supported by the Unison and Unite unions and the Northern TUC, as well as Momentum, Unite the Resistance and Keep our NHS Public.

“There will be a rank and file meeting afterwards to set up a junior doctors’ support group.”

Simon hoped the march will be a “springboard” for the national protest on 16 April.

“We’ll have leaflets for the coaches as well as stalls across the north east all this week,” he said.

Coaches are filling up in other areas as well. A group of around 20 people from the Isle of Wight plan to travel to the mainland to join the coach from Portsmouth.

And Bristol activists have already filled one coach—and are aiming for more.

Jasmine Fischer from Manchester said activists there are planning a “People’s Question Time” style public meeting on Tuesday of next week. She said, “The meeting will have medical

students and teachers speaking at it, and there’ll be a really big leafleting session in town this weekend.

“I think we’ll easily fill two coaches and we’re aiming for more. A lot of people we meet want to sign up.

“It’s so easy to talk to people about it.”

She added, “The Tories are divided, the junior doctors are ramping up action, and then there’s the teachers.

“It’s a really good time to have a national demo.”

At least 30 coaches are booked from across Britain. Go to thepeoplesassembly.org.uk for more info
Topics Austerity, People's Assembly, Tories 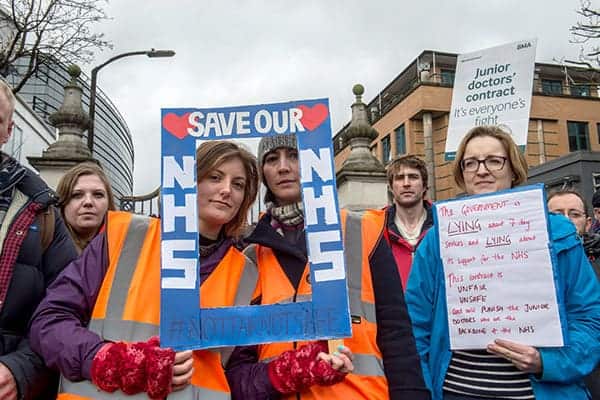