Campaigners from Fast Food Rights (FFR) and the Bfawu bakers’ union took action across Britain yesterday, Thursday, as part of a day of solidarity with striking McDonalds workers in the US.

Protests took place in Wakefield, Cambridge, Glasgow and elsewhere. They were part of a growing campaign for union rights, a £10 an hour minimum wage and an end to zero hours contracts.

In Glasgow members of the Bfawu union’s Fast Food Workers’ branch dressed as “evil” Ronald McDonalds and occupied a branch of KFC.

They also held a “picnic” outside a McDonald’s, and handed out “unhappy meals” to passers-by with information on working conditions and lack of rights.

Bfawu member Lorna McKinnon said, “Our newly established Bfawu branch has been growing significantly with young workers at the front of it, leading the battle to win £10 an hour, and end to zero hours and union rights and recognition.

“Workers in many different industries have been rallying behind the campaign building it in strength and in numbers.”

Meanwhile fast food workers in the US struck to demand a $15 an hour minimum wage. The strike came after minimum wage increases in several states. In Boston, Massachusetts, protesters blocked Commonwealth Avenue, one of the city’s main roads, and tramlines.

Meanwhile in Birmingham, Alabama, strikers chanted, “We are the workers, the mighty mighty workers.”

McDonald’s worker Bush Paudling said, “What brought us out here today, people like McDonald’s are trendsetters for low wages that are causing people to struggle in society.”

Another worker, Brandon Brown, added, “We’re trying to raise up the minimum wage – all this working and people ain’t getting what they supposed to get. 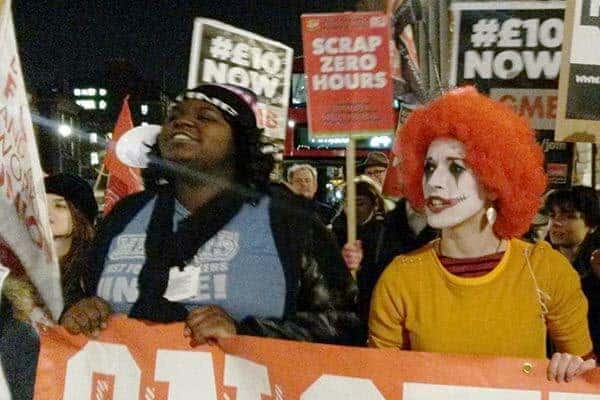