Right to Work conference sparked the flame of resistance

The delegates came together to organise the fightback against the Tory government’s cuts and share stories of resistance.

The day began with a rally in the packed main hall in Friends Meeting House.

The platform showcased the breadth and depth of support for the Right to Work campaign.

There was a sense of the defiance and forces that we will need to fight the bosses’ offensive.

The rally set the tone for the rest of the discussions at the event—the need for unity, the question of parliamentary representation and how best to organise.

Tiago reported that the centre-left Socialist Party government in Portugal is launching a “huge attack on the weak to protect speculators and the rich”.

He said, “Greece is a dress rehearsal for a new wave of attacks by bosses.

“We need to build a coalition of resistance across Europe.”

Student struggle is taking a new radical turn at many campuses in Britain, shown by the number of young people attending the conference.

Sussex university has seen a major battle against cuts and the victimisation of activists (see page 2).

Sonja said, “We have built links with workers and it has strengthened our struggle. We raised money for the lecturers’ strike fund.

“We also brought striking workers from Brighton into the university, and visited them on their picket lines in town.”

This kind of unity will be vital for the struggles we will face in the coming months.

Participants also wanted to offer progressive solutions to a crisis that workers are being made to pay for.

Jeremy Corbyn said, “There should be cuts—we should cancel the Trident nuclear weapons programme and the deployment of troops in Afghanistan and Iraq.”

The conference then broke up into six workshops. Representatives from each of these reported back to the final rally about the issues arising from them.

The final rally left participants with a sense of purpose and determination to go forward by widening the networks of solidarity and resistance.

Chris Bambery, from the Right to Work steering committee, said, “They are attacking all of us at once, unlike Margaret Thatcher’s tactic of taking on one group at a time.

“This is not just another round of cuts. It is a major offensive and we need a Greek-style response.”

She told the conference, “The government attacked tax inspectors like me, blaming us for high public sector wages and the budget deficit.

“We had a general strike on 5 May. It was the biggest in our history.”

Delegates ended the day by voting for a number of campaign initiatives.

With thanks to Mary Brodbin and Roger Cox for extra reporting.

For more go to » www.righttowork.org.uk

Workshops brought activists together to plan for the coming battles 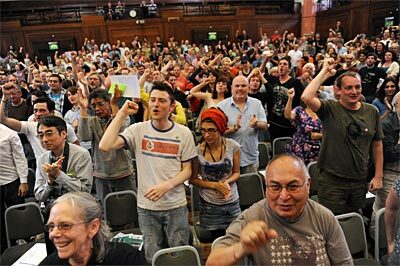