Postal services are heading for catastrophe as government plans to hand Royal Mail to a private firm took a step forwards last week.

A bill authorising the sell-off sailed through parliament with a majority of 81, as Lib Dem and Tory MPs voted to privatise the state-owned firm.

They argued that Royal Mail must be hived off because mail volumes are falling and private firms are more efficient.

And they added that this is also the only way to deal with the firm’s mammoth pensions deficit.

But this is a lie.

First, it is not true that the amount of mail delivered is going down. Royal Mail is deliberately fiddling the figures in an effort to force through a “streamlining” of its workforce and the closure of scores of offices.

Management plans are already causing a crisis, with a huge backlog of mail in many parts of Britain.

Second, Royal Mail’s private sector rivals are only able to make their profits because the market has been deliberately rigged in their favour.

But the post office regulator then insists that Royal Mail delivers its rival’s letters over the “final mile” from local delivery offices at prices that means the state-owned firm makes a loss.

And Royal Mail’s £8.4 billion pensions crisis is not something the government can wash its hands of.

With the blessing of ministers, both Tory and Labour, bosses at the firm took a “pensions holiday” for 13 years. That means that while postal workers carried on making their contributions, Royal Mail itself paid nothing.

That lies at the root of the underfunding of the scheme.

Now, business minister Vince Cable says that the government will bail out Royal Mail pensions in exchange for being able to sell a 90 percent stake in the business. But this is also a sleight of hand.

The Tories and Lib Dems know that the scheme currently has cash available, and that its problems will come in the future as more workers retire.

So, if the government takes over the pension fund, it will be able to loot it before having to make payments in the future.

He is right to do so. The only way that the government can be stopped and the sell-off derailed is if workers are prepared to take action. 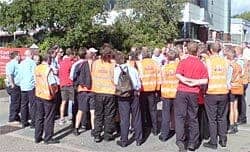