This article is over 13 years, 6 months old
Activists in the postal workers’ CWU union are disturbed by the growing number of activists who have been sacked or who face serious disciplinary charges for the "crime"of being good trade unionists.
By Yuri Prasad
Downloading PDF. Please wait...
Tuesday 08 July 2008

Activists in the postal workers’ CWU union are disturbed by the growing number of activists who have been sacked or who face serious disciplinary charges for the “crime”of being good trade unionists.

Last week Socialist Worker reported on the case of Simon Furze, a rep at the Leicester north delivery office, who has been sacked on charges that many believe were deliberately concocted to weaken union organisation at the office.

Leicester CWU is pushing hard for the case to be brought before the National Appeals Panel (NAP), which assesses cases where disciplinary action taken against reps is linked to their trade union role.

The NAP includes an independent member as well as one representative from both management and the union.

Management are doing all they can to resist this in the knowledge that their case is so weak that it would likely fail.

Simon’s supporters have produced a leaflet outlining the issues surrounding his sacking, and are now planning a major campaign to win his reinstatement.

However, the case of another rep, Kevin Kelly, shows that getting to the NAP is not always enough and the CWU needs a national strategy to support its reps. Kevin Kelly is a driver in Hemel Hempstead, Herfordshire. Last month his sacking was upheld by a majority vote on the NAP.

Bob Cullen, from the CWU’s South Central No1 branch told Socialist Worker that Kevin has been sacked for carrying out his union’s policy during last year’s national dispute.

“I think that the national union needs to develop a harder line in defence of our reps, “ he said.

“We can’t simply rely on the NAP to deliver justice for our activists, particularly when they are being disciplined for their activities during a strike.

“We are often told that the future of this industry rests on greater cooperation between the union and management. But if that is the case it cannot be just a one-way process.

There are now a significant of union reps and activists in Stoke, Bristol, Leicestershire and London who are in similar positions to Kevin and Simon. These are all people who

have put their futures on the line in order to build a stronger union.

The union owes them a debt of gratitude and must show that it is determined to defend them.The CWU nationally should make it clear to Royal Mail that if this campaign of intimidation against the union does not cease, then the union will cease cooperation on questions of modernisation and efficiency and add the reinstatement of all reps to the demands of the forthcoming national ballot.

Around 30 postal workers at the York mail centre held an unofficial strike on Wednesday of last week after management suspended a driver. 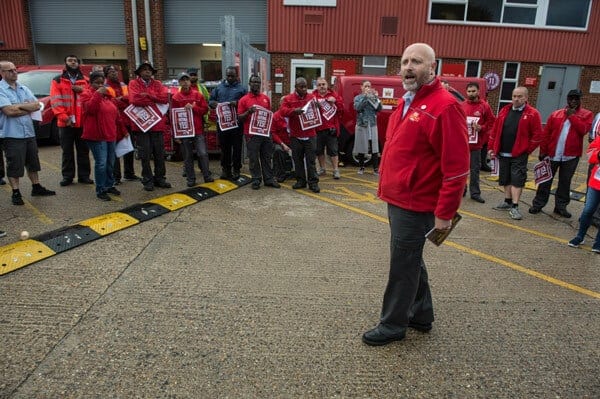 How the CWU can build solidarity across the unions

Put post strikes back on, say reps across country