Standing up to cuts

They now face a new challenge as the council proposes to sack the whole workforce and re-employ them on new contracts. During the strike over 800 people came to the Hackney Empire for a rally organised by the Hackney Fightback anti-cuts group.

There was a tremendous sense of unity and determination to carry on the struggle against the £50 million of cuts planned by the ruling Labour-Tory coalition.

Steve Edwards, union convenor for the building trades, said, ‘I regard all the parties as responsible for the cuts. The choice is simple. If you don’t stand up for something you’ll fall for everything and anything.’

Mark New from the Dudley hospitals’ strike said, ‘The fight’s the same the world over. We’re against government policies that put profit before people. We are rocking the boat before the election and we are right to do so.’

Labour MP Tony Benn was cheered when he said that different strands of opposition to selling off public assets had to come together to fight in a united way.

Local Labour MP Diane Abbott and Guardian journalist Gary Younge also spoke and pledged support for the strikes. Mark Serwotka, speaking the day before he took over as general secretary of the PCS union, said, ‘I can tell the government that you don’t win elections by stabbing working class people in the back. If the Labour Party in Hackney is not prepared to stand up for workers then they should stand aside and let socialists defend services and jobs.’

Hackney council workers have massive support and need to step up the fight. Unfortunately local union leaders seem set on a strategy of reballoting workers before taking any further sustained action.

There is no need for such a ballot even under the anti-union laws. The strikes so far have been solid and have shaken the council. Instead of reopening the whole issue of whether to fight, the unions should be escalating to all out.

A group of local people have taken over the former Atherden Nursery, closed by Hackney council, and are running it as a community centre. Around 50 people met there last weekend. 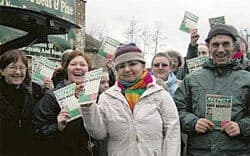 Our campaign for unity