This article is over 10 years, 1 months old
Revolutionary socialist activists in Cairo warned yesterday that the latest round of the media attacks against them show there is an organised campaign to stop the revolution itself.
Downloading PDF. Please wait...
Sunday 25 December 2011

Revolutionary socialist activists in Cairo warned yesterday that the latest round of the media attacks against them show there is an organised campaign to stop the revolution itself.

The MB’s website also carried a report that a member of the Brotherhood has presented a dossier to the public prosecutor claiming that RS activists Yasser Abd-al-Qawy, Hisham Yosry and Sameh Naguib were agitating to overthrow the state and burn public buildings.

But as a wide range of political forces rallied to support the RS, splits and contradictions in the Brotherhood’s position quickly emerged.

Muhammad al-Beltagi, a prominent member of the Brotherhood’s Freedom and Justice Party executive made a public statement in which he distanced himself from the attempt to bring a court case against the RS activists.

“Ideas should be confronted with ideas and not by complaints to the courts, nor by prosecutions” he said on Saturday evening. “I disagree fundamentally with the ideas of Sameh Naguib and Kamal Khalil, but I appreciate the struggle they have fought for this nation over many years alongside us” he added. “What the country needs is dialogue and debate, not accusations and battles tearing us apart.”

In a press conference at the Centre for Socialist Studies on 24 December, Sameh Naguib argued that those who want to see the revolution continue and deepen are now facing an organised campaign against them.

‘The revolution dismantles in order to rebuild. The basic slogan of the Egyptian revolution was: ‘The people want the downfall of the regime’. The regime hasn’t fallen. There are still many battles in front of us before we will be able to bring the regime down.

‘We will never go back on this analysis, and in fact it is what the Egyptian revolution itself has been saying from the beginning. Anyone who took part in the demonstration in Tahrir Square yesterday can tell you that. These are the slogans of the revolution today.

‘But there is also the SCAF which is telling its soldiers to throw rocks and open fire on the protesters, to drag them in the streets, to humiliate and assault women. No, the army is not a single bloc.

‘The last point is that we have to understand that this always happens at moments like this during revolutions.

‘We are for the continuation of the revolution until it achieves its aims: social justice, dignity and freedom. Unfortunately until now we have not achieved any of these three goals. We will continue the revolution, using the methods of the revolution: strikes, sit-ins and demonstrations until we win.” 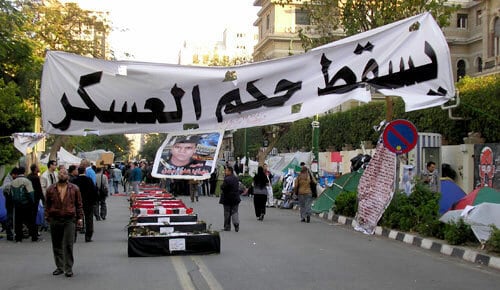