Horrible history of the iron lady

THE TENTH anniversary of Margaret Thatcher’s downfall was greeted with a huge dose of nostalgia last week. Right wing papers like the Daily Telegraph portrayed her as a great Tory leader. Even the liberal Guardian said that “she solved some problems”. Tony Blair criticised some aspects of Thatcher’s policies. But he also said, “I take nothing away from those things that were done in the 1980s which we have kept.”

Yet millions of ordinary people celebrated the end of Thatcher in 1990. What is the truth about Thatcher’s legacy?

LISTENING TO Thatcher’s ravings over Europe last week, it was hard to believe that she was once seen as a powerful leader. But Thatcher was at the forefront of pushing the neo-liberal market policies now pursued by governments and institutions like the International Monetary Fund and World Bank around the world. Today those who push rabidly free market policies are still called “Thatcherites”. For the 11 years after her election in May 1979, Thatcher led an offensive against the working class in order to try to increase the profits of British capitalism.

In the process she wrecked the lives of millions while showering wealth on businessmen and bankers. Thatcher presided over a huge shift in wealth from the poor to the rich. The rich rejoiced at huge tax breaks while the numbers of people living in poverty reached unprecedented levels. The number below the poverty line soared from 9 percent of the population in 1979 to 23 percent by the early 1990s.

The homeless were forced to beg on the streets in a way not seen before 1979. Thatcher launched a programme of cuts and closures, and slashed welfare benefits. Unemployment soared to levels not seen since the 1930s. She was the architect of the kind of privatisation programmes now pushed by governments across Europe, selling off public utilities like gas and electricity. Her mania for the market and deregulation directly led to the BSE scandal.

Above all Thatcher was determined to try to break working class resistance. She took on group after group of workers in set-piece battles designed to intimidate and demoralise the trade union movement. She forced through the toughest anti trade union laws in Western Europe and gave the police the green light to smash workers’ picket lines. But although Thatcher was a ruthless warrior for the rich and powerful she did not get everything her own way.

The decade of greed?

IF YOU listen to some political commentators you could be forgiven for thinking that the majority of people in the 1980s loved Thatcher. The media often portray the Thatcher years as a time when capitalism was “popular”, when there were riches not only for City whizz kids and yuppies, but for workers who bought shares and council homes. Even many on the left swallowed the myth that Thatcher had bought off the working class.

But Thatcher was never universally popular. Although she won three elections she never received the support of the majority of voters. In each election she got well under 50 percent of the vote, with 43.9 percent in 1979, 42.4 percent in 1983 and 42.3 percent in 1987. In 1981 she was the most unpopular prime minister since the Second World War. Thatcher was supposed to have transformed people’s attitudes.

But the vast majority of people did not go along with her pro-privatisation, anti-union, “I’m alright, Jack” philosophy. Even in 1983, when Thatcher scored her biggest election victory, 32 percent thought that taxes should be increased and more money spent on health, education and benefits.

By 1986 this figure had risen to 46 percent. And in that year some 76 percent of working class voters thought there was “one law for the rich and one for the poor”. By the end of Thatcher’s reign in 1990 MORE people (70 percent) thought trade unions were “a good thing” than when she was elected in 1979 (56 percent). In 1990 just 3 percent of people wanted the government to reduce taxes and lower social spending.

CLASS BATTLES that took place at key moments throughout Thatcher’s 11 years could have broken her government. They failed to do so not because of Thatcher’s strength, but because of the cowardice of Labour and union leaders. In 1980 a steel workers’ strike threw Thatcher’s government into crisis.

The workers sent out thousands of flying pickets which stopped the movement of steel, and there was even talk of a general strike across South Wales. Half of Thatcher’s government wanted to retreat. The Sunday Times panicked, “After nine months in power the Thatcher government is in a crisis from which there is no obvious escape.”

But union leaders failed to match workers’ militancy and after 13 weeks called the strike off. Thatcher could also have been beaten during the magnificent year-long miners’ strike in 1984-5. Thatcher panicked when dockers joined the strike in July, and again when pit deputies threatened to strike in October. She told the British coal boss, Ian McGregor, “You have the fate of this government in your hands.”

In the early 1980s thousands of people protested against unemployment. In 1981 riots exploded on the streets of major cites against police harassment and racism.

One million people struck for an hour in 1984 to defend trade unions at the GCHQ spy centre. But each time Labour and trade union leaders failed to build the struggles and call for the mass solidarity needed to win. Increasingly union leaders claimed that strikes and mass pickets were a thing of the past. They urged workers not to rock the boat, claiming it would jeopardise a future Labour victory.

This was a disastrous strategy, and it enabled Thatcher to inflict major defeats on the working class. Nevertheless, resistance and popular opposition ensured that Thatcher’s rule was beset by problems. Thatcher battered the working class, but she did not deal it a death blow. She made life a misery for millions of workers, but she wasn’t able to smash wage levels or introduce the kind of public spending cuts the ruling class had demanded.

And Thatcher failed to achieve her central aim-to reverse the long term decline of the British economy. In the early 1990s Britain suffered its third major recession in two decades.

Why the Tories dumped her

IT WAS mass resistance to Thatcher’s “flagship” poll tax which finally forced her out in 1990. Months of protests in towns and cities across Britain culminated in a mass demonstration and riot in Trafalgar Square in March 1990. Millions of people defied the law, and refused to pay the hated and unjust poll tax.

It acted like a lightning rod for the pent-up bitterness of the Thatcher years-against homelessness, hospital closures, low wages, anti trade union laws and much more. The Tories stuck the knife into Thatcher to save their own necks. Tory Alan Clark, one of Thatcher’s biggest fans, wrote the day after the poll tax riot, “In the corridors and tea rooms people are now talking openly of ditching Thatcher to save their skins.”

In November 1990 sections of the Tory party who disagreed with Thatcher over Europe combined with those who saw her as an electoral liability to force her out. If Labour leaders had thrown their all behind the poll tax protests, the whole government and not just Thatcher could have fallen. Instead they called on people to pay the tax and demanded “exemplary sentences” for those arrested at protests.

TONY BLAIR may have criticised Thatcher last week, but he is pursuing neo-liberal policies in a way that Thatcher could only have dreamt about. The whole New Labour project aimed to build on Thatcher’s legacy. As Peter Mandelson admitted, New Labour’s strategy “is to move forward from where Margaret Thatcher left off”.

Since 1997 New Labour has forged ahead with privatisation in areas that Thatcher dared not touch. Schools, hospitals, services for the elderly, council housing, the London Underground and air traffic control are all up for grabs. Our resistance got rid of Thatcher. We need more resistance to get rid of the Thatcherite policies of her New Labour heirs. 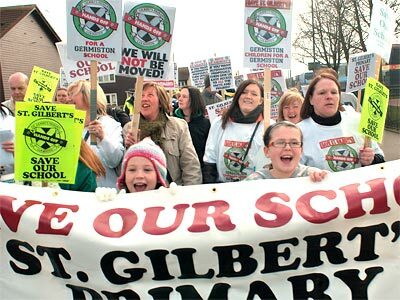