This article is over 10 years, 9 months old
Thousands of students are demonstrating in central London today, Wednesday, to protest against government attacks on education.
By Siân Ruddick
Downloading PDF. Please wait...
Wednesday 09 November 2011

Thousands of students are demonstrating in central London today, Wednesday, to protest against government attacks on education.

The atmosphere is electric. University, college and school students are marching together with lecturers and other workers.

Patricio de Stefani is a postgraduate student at the University of Liverpool. He told Socialist Worker, “This is the same struggle here as that in Chile. It’s a global movement now, not just about fees but the whole bigger picture.

“We should have fought back years ago, but now it feels like we have hope again.”

One told Socialist Worker, ‘They’re trying to destroy our future. You’re always told if you try hard, you’ll do well. But that’s a lie.’

Christian Khan solicitors made banners for their office windows supporting the students and the right to protest. Marchers cheered as they passed.

Amanda Walters is campaigns officer at the University of Manchester Student Union. She said, “Even after the tuition fees vote last year, the battle isn’t over. They want to increase fees for postgraduate students, which will make it even harder to study.

“We need more demonstrations before the white paper is debated next semester. The white paper would entrench all these problems and inequality.’

Kendra from Westminster Kingsway College said, ‘I wasn’t involved in the protests last year, but now it’s really hit me what not having Education Maintenance Allowance (EMA) will mean.

“I would have just got a shit job after my GCSEs without EMA. So many other people will now have to do that.’

The march is heading for the city of London. Students hope to join up with the Occupy London protest there and with electricians protesting against attacks on their pay and conditions. 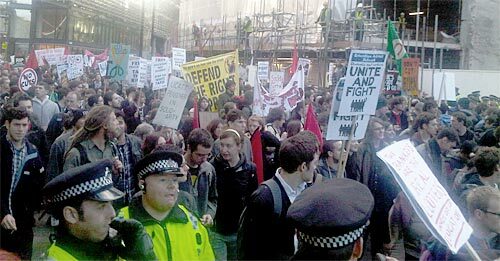 Anger on the streets of London as 10,000 students demonstrate