Turkish and Kurdish Respect activists: ‘A community is coming of age’

This article is over 15 years, 9 months old
The coalition that makes up Respect is broadening in the run-up to the 4 May council elections. A number of left wing Turkish and Kurdish activists have been selected to stand.
By Simon Assaf
Downloading PDF. Please wait...
Saturday 15 April 2006

The coalition that makes up Respect is broadening in the run-up to the 4 May council elections. A number of left wing Turkish and Kurdish activists have been selected to stand.

Asli Demirel, 34, was born in Istanbul, Turkey. She came to Britain as an au pair in 1989 then went to college where she studied computing.

One of the first Kurdish women candidates in the local elections, she is mounting a challenge to New Labour in Clissold ward, Hackney.

For Asli the local elections are an important milestone for her community.

She told Socialist Worker, “Our challenge is to increase the turnout and fight for representation in our local areas. This is the political battle within our communities.

“The question of the Iraq war and the impact of cuts on local services are tied in people’s minds.

“Respect is recognised as leading the fight for local democracy, and so there’s an expectation with us.”

Tekin Kartal is the Respect candidate for St Ann’s ward in Haringey.

Tekin came to Britain in 1986 as a 19 year old student. He was born in Adana, south Turkey.  He said, “I was a school student when the military launched a coup in Turkey in the early 1980s, so I grew up in the shadow of repression.”

A plumber by trade, Tekin threw himself into organising among the new arrivals in Britain from Turkey.

“Respect has become the centre of attention inside the Turkish and Kurdish communities,” he said. “We are seen as fighting on every front, from opposition to the war to the campaign for our local hospital.

“Many people came from small towns and villages, often escaping Turkish military rule in the east of the country. We had to convince them to register to vote so that they could have an influence of how local services are run.

“This campaign is about fighting to make a difference, and not to hand Labour our votes.

“The May elections is another important step in our campaign for representation, but this campaign started with the registration of voters in 2001.

“We have registered 350 voters in St Ann’s ward and over 700 on the Broadwater Farm estate.

“Many of the Kurds and Turks came to Britain and found others either from their village, town or region.

“These communities set up coffee and tea houses, football clubs and networks of families. This is the common experience of all newly arrived people.

“The coffee and tea houses are the centre of networks that reach back to the village.”

“The Turkish and Kurdish communities are coming of age”, said Sait Akgül, a civil rights lawyer and member of Respect national council. Sait is the Respect candidate for the West Green ward in Haringey.

“It is common now for the young to speak Turkish or Kurdish with their parents and English among siblings and friends.

“These children have grown up in London, and are Londoners. They are as angry at the state of the schools as they are the war in Iraq.

“It is natural for immigrant communities to support Respect.

“For years the political establishment ignored the Kurds because we were an embarrasment to their friends inside the Turkish regime.

“But in the run up to the Iraq war Labour ‘discovered’ the Kurdish question, and now they want our votes. This hypocrisy in not lost on Kurdish people.

“This is a battle that is taking place from door to door, cafe to cafe.

“It is a battle between Respect and Labour. This is about education and hospitals, and it is a campaign about the war and imperialism.

“The political word for this is ‘integration’. A new generation was born and have grown up here.

Fero Firat, Respect candidate for Leabridge ward, Hackney, said, “The Turkish and Kurdish communities should have been natural Labour supporters, but they are deeply disappointed with Blair.

“The war on Iraq casts its shadow over us, whether here in Britain with the terror legislation, and back home where our families fear the regional instability that the war has unleashed.”

Fero was born in eastern Turkey in the heart of Kurdish region. Like many of his generation, he would pay a hefty price for opposing the government.

After his military service he moved to Istanbul were he found a job as a metal worker.

He was one of a dozen workers who were sacked for organising a union, but it was his work on a socialist newspaper that would draw the attention of the state.

He was arrested for raising Kurdish issues in his newspaper and calling for strikes. Facing jail he fled to Britain where he found asylum.

After completing a degree in European studies he became a community worker.

In 1998 the threat of jail was lifted following a partial amnesty in Turkey. He became a British citizen in 2001.

Fero said, “Our campaign emerged out of the anti-war movement that was strong in our area.

“This movement has continued with campaigns against £13 million cuts in Homerton hospital.

“These cuts are being pushed by central government but the Labour-run council is compliant.

“That is why we are urging people not to vote Labour—both for national and local reasons—and to vote for Respect instead.” 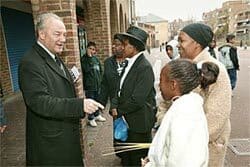 Respect out to make a big impact on 4 May