This article is over 14 years, 7 months old
Britain’s biggest construction union has warned that the building of the Olympic Park and venues for the 2012 games will be hit with similar delays, strikes and spiralling costs to those that plagued Wembley Stadium.
Downloading PDF. Please wait...
Thursday 07 June 2007

Britain’s biggest construction union has warned that the building of the Olympic Park and venues for the 2012 games will be hit with similar delays, strikes and spiralling costs to those that plagued Wembley Stadium.

The Ucatt union says it has reached deadlock in talks with the Olympic Delivery Authority (ODA) over the insistence that contractors on Europe’s biggest post-war construction project should use directly-employed labour. The ODA has not specified this point in its contract and been dragging its feet on the issue.

More than 9,000 workers will be required on the Stratford site in 2010 at the peak of construction for the games.

Alan Ritchie, general secretary of Ucatt, “Direct employment for the Olympics is entirely possible just as it was for Heathrow Terminal 5. If the ODA goes ahead and insists on opening the floodgates for bogus self-employed labour then the results will be disastrous”

Ucatt says it is not against genuinely self-employed workers but claims “bogus” self-employment is rampant in the construction industry, meaning workers do not get proper holidays, sick pay and employment rights.

The £750m Wembley project was delivered more than 12 months behind schedule and was beset by industrial disputes. Ucatt says the lack of directly employed labour meant that on several occasions illegal workers were found to be working in the stadium.

Ritchie said, “Past experience demonstrates what happens when you use bogus self-employed workers on major projects. Deaths and serious injuries increase, costs spiral out of control, projects are finished late and work is beset by wildcat strikes.

“The ideals of the Olympics must not fall prey to gangmasters, unscrupulous employment agencies and other fly-by-night organisations out to make a quick buck at the expense of construction workers – and who will make profits on the hard graft of vulnerable exploited migrant workers.” 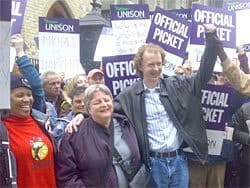 Newham council: ‘We are all Michael Gavan’

Teachers are right to act on shortages