US budget crisis: Obama will make poor pay for crisis

Could the US government really default on its debts?

The US needs to raise its “debt ceiling”—the maximum amount it can borrow—to keep paying its debts. It reached the current borrowing limit, $14.3 trillion, in May.

But the Democrats, led by president Barack Obama, and the Republican Party can’t agree a plan to do this. They are wrangling over spending cuts.

The government can afford to service its debts until 2 August. After that, if a new ceiling hasn’t been agreed, the government will run out of cash.

What do the two parties disagree about?

Less than you’d think. They agree that they want to cut $3 trillion from government spending over the next decade.

Obama has said that he’s “willing to cut a historic amount of government spending”. He proposes to cut $650 billion from Medicare, Medicaid and other benefits.

This would plunge millions of working class Americans into dire poverty and ill health—and shove those already struggling to survive over the edge.

Their main disagreement, though, is how far the debt ceiling should be extended. Obama doesn’t want to deal with the problem again in 2012, an election year.

What would the cuts mean?

Medicaid is a health programme that allows some poor people to get healthcare.

It’s estimated that more than 50 million people rely on Medicaid—more than half are from ethnic minorities.

Obama is also happy with cuts to Medicare, a health insurance programme for 47 million older people and younger people with disabilities.

Obama is also proposing cuts to social security for 52 million unemployed, retired and disabled people—which even the Republicans were not initially calling for.

But isn’t Obama standing up to the Republicans?

Obama claims his own cuts plan is “extraordinarily fair”. But fair to who?

It’s true that he does want to end tax cuts that George Bush introduced and close some tax loopholes for the rich—unlike the Republicans.

But Obama is only prepared to raise less than $1 trillion this way. Meanwhile, he is prepared to force a huge $3 trillion worth of cuts onto ordinary people.

Why has the row broken out now?

The US Congress has voted to raise the debt limit ten times since 2001.

But the ongoing economic crisis has increased tensions between the Democrats and Republicans.

It has also hit Obama’s popularity ratings—and given confidence to some Republicans to try to ram through an assault on the working class.

A similar deadlock hit the government in April.

Politicians reached a shoddy compromise at the last minute. Democrats agreed to $39 billion worth of spending cuts in the budget up to September—a scale one senator deemed “historic”.

This round of cuts is 75 times bigger.

What would happen if the US did default?

It would dramatically intensify the global economic crisis. It’s unlikely to be allowed to happen, though.

The US owes much of its debt—$4.6 trillion—to itself. As Paul Craig Roberts, former assistant secretary of the Treasury, put it, “If Goldman Sachs is too big to fail, then so is the US government.”

A default would be unprecedented. US treasury bonds would be devalued. Lenders would charge the country higher rates. Global markets would go into freefall.

The real victims, though, would be working class people.

On 3 August the US is due to pay $23 billion in social security benefits. If they aren’t paid, tens of millions of people will have no money to pay their rent, their bills, or to buy food.

And if the crisis intensifies, those at the top of society will strain even harder to make those at the bottom pay for it.

Is there an alternative?

There’s more than enough money to fund key services that ordinary people in the US need.

The US is home to the most millionaires in the world—nearly 30 percent, according to the World Wealth Report.

And they are getting richer. Rich people in North America increased their wealth by 9.1 percent in 2010, to a staggering $11.6 trillion.

Like other neoliberal politicians, Obama says there are “tough choices” that have to be made.

That’s true. The choice is who pays for the economic crisis—ordinary people or the obscenely wealthy at the top?

There are also some less tough choices Obama could make. Ending the war in Afghanistan, for example, would save billions.

The US spends more than $20 billion every year just on air conditioning for its troops in Iraq and Afghanistan. 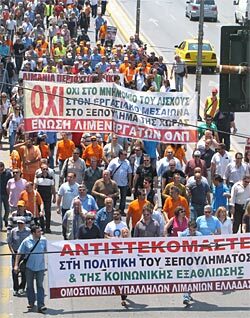