Workers are out in force

Some 650 bus workers employed by Arriva at depots across west Yorkshire have been on continuous strike since 6 June and show no sign of slowing down. Members of the Unite union walked out after rejecting a 4.1 percent pay offer during the cost of living crisis when inflation is over 11 percent.

Arriva bosses tabled another offer that would give workers between 8 percent and 12 percent, depending on their grade. But workers rejected that and have carried on striking. Workers are right not to settle for less than inflation, it would be a real terms pay cut. And negotiations are currently on hold with the workers remaining strong and determined to win.

On the picket line in Wakefield workers sung and chanted as passing cars sounded their horns in support. Most bus services are cancelled in 20 areas including Wakefield, Dewsbury, Bradford, Leeds, Huddersfield and York.

And another pay battle is set to give the Arriva bosses a headache. Some 1,800 workers across the north west of England have started a strike ballot after rejecting a low pay offer.

The offer involved a maximum increase of 3 percent or 6 percent with reductions in sick pay and loss of Saturday enhanced pay.

Currently the bus drivers are paid just over £11 an hour. If they walk out it will disrupt services that operate throughout Birkenhead, Bolton, Bootle, Liverpool, Macclesfield, Manchester, Runcorn, Southport, Speke, St Helens, and Winsford.

Low paid workers deserve better—but it is likely to take a fight similar to the one being waged in west Yorkshire to win. 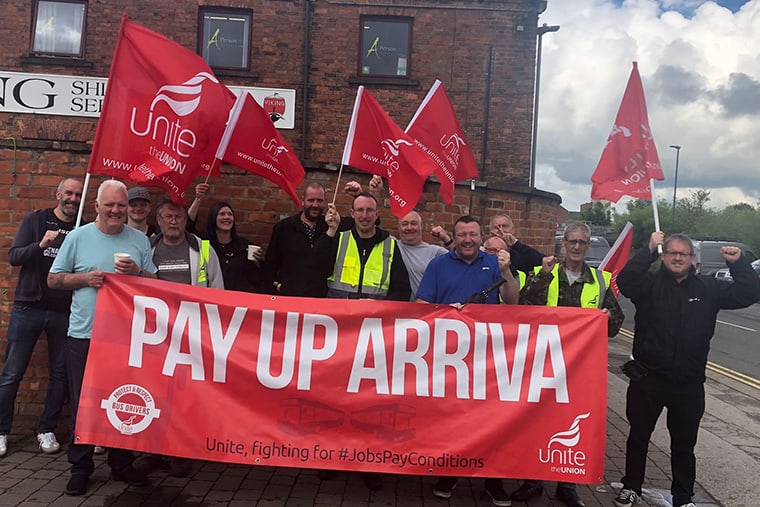