You may not have noticed, but Greece isn’t the only country that is engaged in difficult negotiations about its foreign debt. Ukraine is too. Decades of economic misrule by rival gangs of oligarchs have left Ukraine with a total external debt estimated by the Institute for International Finance at £84 billion.

Political upheaval and civil war mean the economy has shrunk sharply— by 17.6 percent in the first quarter of this year. According to finance website Investopedia, depending on the estimate of economic collapse you use, the crucial ratio of debt to national income is somewhere between 130 percent and 184 percent.

These are Greek-style levels and they are unsustainable.

But the Western-backed regime in Ukraine has received more indulgent treatment than has Greece’s Syriza-led government or even its more conservative predecessors. The International Monetary Fund (IMF) announced in February a £26 billion bailout programme for Ukraine.

Of course it involves the usual neoliberal conditions—economic “reform” and slashing consumer energy subsidies. But there hasn’t been the suspension of economic sovereignty Greece and other indebted eurozone states have suffered.

Maybe this is because the Kiev government has been so forthcoming in opening itself to outside influence without external pressure. Natalie Jaresko, the finance minister, was born in Chicago and used to work for the US Department of State. The economy minister, described as “another former fund manager and investment banker”, is Lithuanian.

There are also a lot of Georgians who served under Mikheil Saakashvili’s regime now working in Kiev. The right wing pro-western ex-president of Georgia provoked a war with Russia in 2008 and was voted out of office in 2012. So it’s alarming to know that Saakashvili is close to the Ukrainian president, chocolate billionaire Petro Poroshenko.

The great southern port of Odessa was the scene of one of the incidents that drove Ukraine to war. In May last year 31 pro-Russian protesters burned to death there when the trade union building where they had taken refuge from a right wing mob caught fire.

Putting a thug like Saakashvili in charge of Odessa is an act of provocation.

None of this is likely to alter the supportive Western attitude towards Kiev. The IMF package depends on the participation of private sector creditors. Jaresko is demanding that they accept a haircut—that is, a cut in Ukraine’s debt to them.

The Kiev government is also advancing what is called the “odious debt argument”. It is denying that it is obliged to pay debts incurred by its predecessors, notably president Viktor Yanukovyich, who was overthrown in February last year. Last month Ukraine declared it “has the right…not to return loans borrowed by [a] kleptocratic regime”.

Despite the generally acknowledged corruption of successive Greek governments, this isn’t an argument that Syriza has pushed seriously. When governments in the global south make it, there’s usually a lot of tut-tutting in the US and other Western countries.

But German finance minister Wolfgang Schauble, who has been unrelenting in his refusal to countenance any reduction in Greece’s debt, said after a G7 meeting in Dresden on Friday of last week, “We agreed we must try to support the negotiation of the restructuring of Ukraine’s debt, which must be brought to a successful conclusion.”

The situations of Ukraine and Greece aren’t exactly the same. Greece’s private-sector creditors were forced to take a haircut in 2012. Greece’s debt-to-national-income ratio has nevertheless continued to rise, thanks to the IMF’s and the European Union’s economic mismanagement.

But most of Greece’s debt is now held by public bodies such as the European Central Bank and the IMF itself.

This may help to explain why the line is much tougher on Greece’s debt than Ukraine’s since the “institutions” supervising Greece would lose out if there were another haircut.

But there’s also geopolitics. Ukraine is on the West’s side in an inter-imperialist struggle with Russia. And so of course its toadying ministers are getting an easy ride. 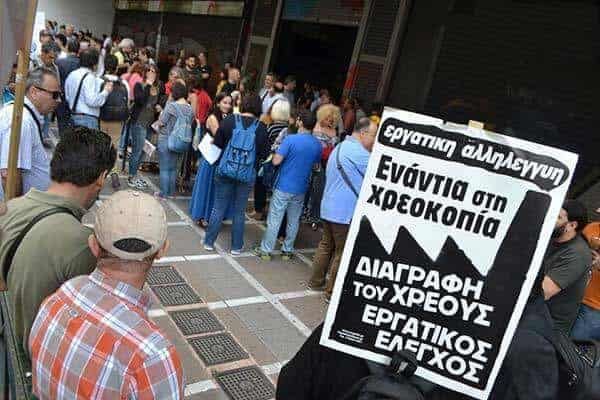