This article is over 10 years, 9 months old
The average pay for cabin crew at British Airways (BA) has nosedived by £1,500 over the past year.
By Sadie Robinson
Downloading PDF. Please wait...
Tuesday 16 August 2011

The average pay for cabin crew at British Airways (BA) has nosedived by £1,500 over the past year.

The fall, revealed last week by the Civil Aviation Authority (CAA), shows the devastating impact of BA’s assault on workers. It is a cut in pay of 4.7 percent—the first time that average pay for BA cabin crew has fallen in five years.

Cabin crew fought a long‑running battle against the assault, including 22 days of strikes.

Their Unite union recommended a deal to end the dispute earlier this year, which enshrined a number of these attacks on workers.

Socialist Worker argued against the deal.

The CAA’s figures show that average pay for crew at Virgin has also fallen. But at other airlines, such as BMI, crew’s pay rose by £2,100.

BA has plenty of money to pay workers a decent wage. But it is attacking workers precisely to grab even more money.

It announced a half-year profit of £158 million last October and made over £180 million in operating profit in the first half of this year. 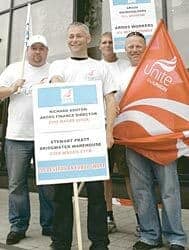 300 at determined Stop the War conference