Cuts have just made crisis worse

In Europe, the contagion from the debt crisis is spreading to the biggest economies—Spain, Italy, and even France and Germany.

German chancellor Angela Merkel and French president Nicolas Sarkozy met on Tuesday in the latest round of talks aimed at resolving the crisis.

The bailouts of Greece, Portugal and Ireland—and the brutal austerity imposed on them—have not stopped the contagion spreading.

The European Central Bank (ECB) spent an incredible £19.4 billion buying up government bonds last week in an effort to shore up Italy and Spain’s economies. This takes the amount of eurozone countries’ government bonds the bank holds to £84.4 billion.

And Germany and France are being hit by the turmoil. The German economy, seen as the powerhouse of Europe, grew by just 0.1 percent between April and June.

The French economy stagnated in the same period.

Rumours that ratings agencies were about to remove the country’s AAA credit ratings, making it more expensive to borrow, caused jitters in the financial markets.

The US has also recently agreed to slash £1.8 trillion in government spending—meaning more cuts and poverty.

But key figures among the global ruling class can see that austerity is not having the required effect.

Christine Lagarde, the head of the International Monetary Fund, wrote in the Financial Times newspaper this week that governments should balance spending cuts with measures to support growth to avoid a double-dip recession.

US billionaire Warren Buffet has even called for higher taxes on the super-wealthy, who are not being taxed as much as workers.

Chancellor George Osborne claimed in parliament last week that world events had “completely vindicated” the cuts. But the British economy has barely grown in the last few months, and as seen elsewhere, the cuts will make things worse. We have to continue resisting the austerity agenda. 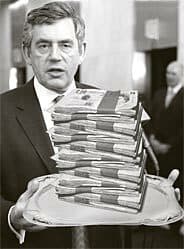 Stop giving our cash to bankers - Sack them!

Give us a Christmas bonus: get the cash back from banks