This article is over 12 years, 5 months old
A scab "union" has been set up at British Airways to undermine the cabin crew’s strike ballot.
By Sadie Robinson
Downloading PDF. Please wait...
Tuesday 26 January 2010

A scab “union” has been set up at British Airways to undermine the cabin crew’s strike ballot.

The “Professional Cabin Crew Council” (PCCC) has emailed cabin crew telling them to vote no.

The workers’ Unite union believes that BA is directly funding it.

The PCCC smells of the bosses. Documents obtained by Socialist Worker show that it is out to destroy the union.

“Unite have acted illegally, they have misrepresented us, and they have unashamedly turned the public against us,” one PCCC document reads.

“We are therefore trying to spread the word through the cabin crew community to Vote No in the re-ballot and resign from Unite.”

The scab “union” is a shadowy organisation. It refuses to give any details about who has set it up—using alleged fear of Unite as an excuse.

“Unfortunately, we cannot tell you who we are because if we do, they will be on to us, and they will stop it. By any means,” it claims.

Its description of working life at BA will be alien to workers. In its latest flyer, “Myths about voting yes”, it argues, “We have suffered no real hardship.”

Most cabin crew would disagree. Last November, BA imposed drastic changes on workers without consultation with the union.

The PCCC defends the cuts. It says that BA “tried to negotiate for nine months. Bassa [part of Unite] chose not to listen, but instead walked out of meetings. BA had no option but to impose.”

“Please be assured that we are not managers, we are cabin crew,” it claims. But it is hard to find any cabin crew who agree with cutting their crew numbers.

Every piece of correspondence from the PCCC is signed off with that great workers’ slogan, “A better way for our business. A professional way.”

Workers have contacted Unite to complain that they have received anonymous emails about the PCCC.

Many will ask how it has access to workers’ email addresses if it is simply a group of cabin crew.

BA has a history of using scab organisations to try and undermine workers and weaken union organisation.

Cabin Crew 89, a breakaway “union”, was set up in 1989. It was recognised and encouraged by BA bosses.

It emerged after senior management set up a secretive committee to try and split cabin crew.

One confidential memo from the committee said it planned to weaken “the hold of trade union power over cabin crew members.”

When cabin crew struck in 1997, Cabin Crew 89 was used as a scab union. After talks between BA and Bassa broke down, BA continued to negotiate with Cabin Crew 89.

Its members, unsurprisingly, voted to accept BA cuts, which BA then imposed on all workers—despite the fact that the breakaway union represented only a tiny minority.

Bosses in other industries have taken up the tactic of organising scabs to try and break strikes.

Today BA is openly recruiting for scabs. It has asked other BA workers to volunteer to do the work of cabin crew if they strike.

BA bosses are on an all-out offensive against workers. Last month they ran to the courts to stop workers striking.

That was despite over 80 percent of workers turning out and voting by over 92 percent to strike.

Bosses have threatened to take away travel allowances from strikers. Many workers who live abroad need these allowances to see their families.

Over 13,000 cabin crew workers at BA are balloting for strike action to stop job cuts, attacks on pay, allowances and conditions.

Propaganda from the right depicts them as union dupes. The reality is that they are determined to fight.

Every mass meeting that BA workers have held has been upbeat and determined.

A poll on the union’s website asked how many days strike action workers’ thought they should take in the event of a yes vote.

Nearly 70 percent wanted to strike for ten days or more.

There is a danger that union leaders will squander this potential. When the latest ballot was announced, Unite rushed to stress that it would not hold strikes over Easter.

Unite’s alternative proposal, “The Way Forward”, agrees to allow new crew to work on different pay and conditions. It also agrees to a two-year pay freeze.

The pilots’ union Balpa, meanwhile, has taken the disgraceful position of being “neutral” on the issue of strikebreaking.

The TUC is attempting to broker “peace talks” between BA and Unite. It should not be encouraging negotiations with the bosses—particularly when they are organising scab labour.

It is pressure from below that has forced the union to act—and workers have to intensify that pressure to win. 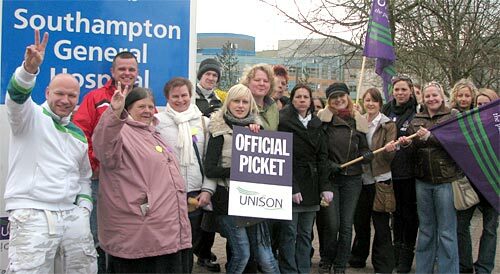