UCU union members at the University of Brighton walked out from 1pm last Friday.

The half-day strike was the first walkout in a dispute over redundancies and attacks on conditions.

Bosses have also said they will choose which issues they will negotiate with the UCU.

This move would effectively derecognise the union.

Workers have also begun a work to rule.

They plan a two-day strike on 26 and 27 April and escalating action after that.

Dawn, who is the UCU equalities officer, was made compulsorily redundant in a restructure just before Christmas.

The union believes Dawn has been victimised because of her trade union activities.

The union is asking trade unionists to write to vice chancellor Lindsey Sergeant to complain. 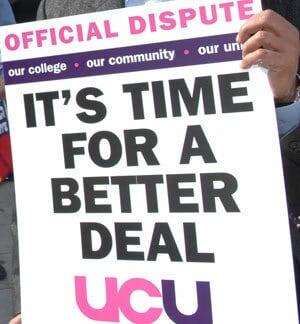