This article is over 9 years, 8 months old
Abdelbaset Ali al-Megrahi, the man who didn’t commit the Lockerbie bombing, has died.
By Simon Basketter
Downloading PDF. Please wait...
Tuesday 22 May 2012

Abdelbaset Ali al-Megrahi, the man who didn’t commit the Lockerbie bombing, has died.

He was convicted in 2001 of murdering 270 people when Pan Am Flight 103 exploded above the Scottish town of Lockerbie 13 years earlier.

Grubby imperialist power politics overshadow the case. The shifting sands of who the US and Britain wanted as allies in the Middle East shaped the framing of Megrahi.

As political allegiances changed, so did official investigations into the Lockerbie disaster.

In the run-up to the 1990 Gulf War, original suspects Syria and Iran were dropped and Libya was blamed.

In the years since the sands shifted again. For instance, Libya handed over Megrahi to face trial in order to get sanctions on the country lifted. The trial, held specially in the Netherlands, was a farce.

When Britain wanted Libya as an ally, mostly because of its oil reserves, Megrahi again became a bargaining chip.

No one among the establishment has real concern for the victims of the bombing. They don’t want the truth of the Lockerbie bombing revealed.

Megrahi was released from prison in 2009 after serving eight years in jail.

Both the Scottish and Westminster governments were involved in the blackmailing of Megrahi into unnecessarily dropping his appeal as a condition of his release.

Megrahi said that he did so because Kenny MacAskill, the Scottish Justice Minister, suggested it would be easier to send him home if the appeal was stopped.

Former CIA officer Robert Baer was part of the initial investigation into the case. He said, “Your [Scottish] justice secretary had two choices—sneak into Megrahi’s cell and smother him with his pillow or release him.

“The end game came down to damage limitation because the evidence amassed by his appeal team is explosive and extremely damning to the system of justice.”

The case was sent back to court after the Scottish Criminal Cases Review Commission concluded that there may have been a miscarriage of justice.

The bombing was most likely retaliation for the shooting down of an Iranian airliner.

David Ben-Ayreah, a spokesperson for the victims of Lockerbie families, said, “As someone who attended the trial I have never taken the view that Megrahi was guilty. Megrahi is the 271st victim of Lockerbie.”

Jim Swire, whose daughter Flora was killed in the bombing, said, “I met him face to face in Tripoli in December last year, when he was very sick and in a lot of pain.

“But he still wanted to talk to me about how information which he and his defence team have accumulated could be passed to me after his death.”

Swire added, “Right up to the end he was determined—for his family’s sake, he knew it was too late for him—how the verdict against him should be overturned”.

For more on the case, go to bit.ly/SWlockerbie

Gaddafi's death is relief for West 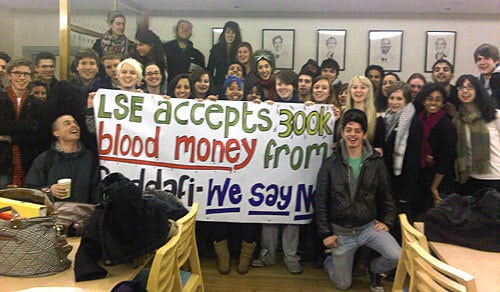 Students occupy the LSE in solidarity with Libyan revolt