Over 5,000 people joined the Unite Against Fascism (UAF) demonstration.

The EDL gathered just 600. They wanted to march into Tower Hamlets and into Altab Ali Park. The park is named after a young Bangladeshi garment worker murdered by racists in 1978.

The UAF counter demonstration, supported by United East End and many others orgnisations, opened the day with a rally in the park.

Writer Owen Jones said, “We are a community united, standing in solidarity. Where you march we march. We stand together and we’ll win this together.”

John McLoughlin from Tower Hamlets Unison union (pc), said, “How dare they talk about civil rights. What about our right to live without fear.”

Mahmoud, who lives near the park, said, “It’s brilliant to see so many people out together. This is Tower Hamlets. These are our streets, the EDL will not come here to spread their hate.”

The anti-racist mobilisation meant that the EDL was restricted to a brief rally at Aldgate in the city of London.

When news came that the EDL had scurried away from Tower Hamlets over Tower Bridge, demonstrators staged a victory march down Whitechapel Road. They rallied outside the East London mosque chanting, “Whose streets? Our streets.”

Joint secretary of UAF Weyman Bennett told the crowd, “The EDL will never come to the streets of east London. Who stopped them? We stopped them! Let’s continue to stand together in solidarity.”

Video of Whitechapel Unite Against Fascism demonstration on Saturday 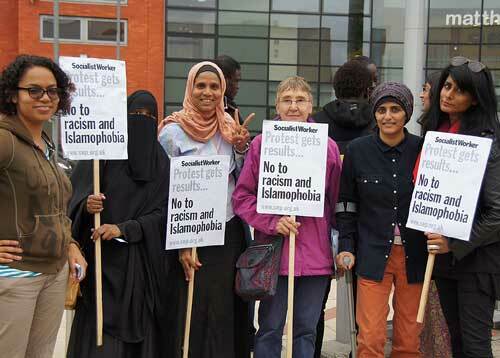