This article is over 17 years, 1 months old
More than 200 people held a "freedom march" through Basildon, Essex, last Saturday in protest against threats to evict Travellers from Dale Farm, the largest Traveller site in England.
By Tash Shifrin
Downloading PDF. Please wait...
Saturday 21 May 2005

More than 200 people held a “freedom march” through Basildon, Essex, last Saturday in protest against threats to evict Travellers from Dale Farm, the largest Traveller site in England.

The marchers, many of them children in school uniform, carried banners and placards saying “no evictions”, “save our homes” and “let us stay in school”.

Basildon council has threatened to evict around 80 families from the site, which has a mixture of caravans and bungalows, claiming that they are breaching planning rules.

Dale Farm is the site targeted by Tory leader Michael Howard as part of his election campaign, which whipped up racism against Travellers.

Martin Collins, director of the Irish Traveller Movement, said, “Michael Howard went to Dale Farm and visited the one guy making complaints about the Travellers. He never had the courtesy to see any of the Travellers.

“Now Traveller children are being attacked in school and in the street. This isn’t just a dry legal dispute about planning arrangements — it concerns real families, children, their health and education.

“The council has had two years to find the families somewhere else to live, but it has done nothing.”

The Travellers should be given planning permission so they can live on their own land, or be provided with sites where they can rent accommodation, said Martin.

The Dale Farm Travellers are being backed by other Gypsy and Traveller organisations around the country. Local churches have given support to the Travellers. The marchers also picked up some support from people in Basildon town centre. 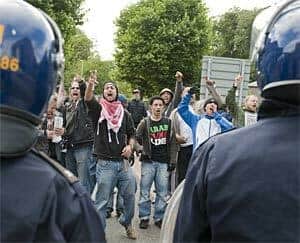 EDL rampage after failure in Dudley

Singing out against cuts