We were extremely saddened by the sudden and unexpected death of our friend and comrade Martin Humphries.

Martin was a tireless and longstanding socialist, trade unionist and campaigner.

He joined the International Socialists (forerunner to the Socialist Workers Party) as a student at Essex University in the mid-1970s and cut his teeth at the Grunwick dispute in north west London.

A few years later, Martin’s sense of adventure took him to Iran where he witnessed the fall of the Shah and the Iranian Revolution in 1979.

Martin moved to Birmingham in the early 1980s and joined the civil service shortly afterwards where he was an active shop steward. He was a dedicated PCS union rep representing anybody who needed it, but more importantly he got people organised.

Sparkhill Jobcentre went from two people on the picket line to 25 in October 2014.

Martin made sure that all the TUC demos had workers from the job centre on them. The 2011 demo had a coach that started at the job centre because so many people went.

Six people went from the job centre on the 21 March anti-racism demo last year and in tribute to Martin more are planning to come this year. A tribute to Martin was held in the office and everybody was proud to have had him as their rep.

He regularly attended PCS conference and was respected across the PCS with tributes being posted from across the country and political spectrum.

More recently Martin brought this enthusiasm as a committed SWP comrade and embraced the role of membership secretary to the newly formed Birmingham central branch.

His years as an experienced comrade enhanced the work of the district committee.

Martin loved nothing better than a good debate where his sharp intellect was put to use and he could share his depth of knowledge with both friend and foe.

He had an eclectic taste in music ranging from Mozart, jazz and George Formby to 80s and 90s pop. He would talk about this passion as keenly as any political debate.

Many words have been used to describe Martin, such as clever, funny, energetic, exasperating, engaging, intellectual, loyal, interesting, irritating and full of ideas.

But most of all Martin was a great friend and comrade and will be sorely missed by us all. Our condolences go to his family, to whom Martin was very close.

Martin’s funeral will take place on Fri 6 March, 1pm, Perry Barr crematorium, 389 Walsall Rd, Birmingham, B42 2LR. Followed by a reception nearby at the Tower Pub 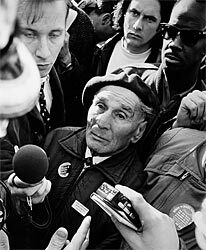 Pete Seeger: A song for every struggle