An extraordinary new three part documentary turns a spotlight on the largest movement of people since the Second World War that has seen millions of refugees forced to flee to Europe.

Exodus: Our Journey to Europe airs on BBC2 this week. It combines a professional film crew and footage filmed by refugees on camera phones.

The first episode covers the refugees’ lives and journeys and moves between the Turkish port of Izmir, Aleppo in Syria and the Greek Islands.

We meet Tarek and his lively eleven year old daughter, Isra’a. She is an engaging mix of streetwise and touchingly naive as she dodges between the illegal street stalls watching for police raids.

Syrian refugees cannot work legally in Turkey and run these stalls to earn enough to live and continue their journey.

Hassan is a teacher who fled after being arrested on a demo. Scenes of his previously happy life in Aleppo with his nice apartment and communal swimming pool are contrasted with Aleppo now, a city reduced to rubble. Sobbing traumatised toddlers run from the bombs.

He negotiates with smugglers for a ticket on a boat to Greece and discovers that they lie. The boats are overcrowded and the lifejackets are fake. His first attempt fails when the boat nearly sinks.

What becomes clear is that none of these people were poor.

Before the war they had businesses or professions. They sold all their property to make the journey.

When Tarek and 16 of his extended family eventually get on a boat he pays over £10,000.

When Hassan reaches Greece he only has the clothes on his back. His luggage was lost on the sinking boat.

One of the family comments that nobody would leave their home and risk their children’s lives in the sea if there was any other choice.

The documentary captures the constant change and uncertainty in refugees’ lives as they move between hope and fear for the future.

And when they finally reach Greece they don’t find the Europe of their dreams. Instead there is chaos, squalor, political hostility and legal barriers.

It brings out the resilience of people in the most adverse circumstances.

Their conversations are full of references to bombs and death but there is hope for a new life as they support and encourage each other to continue.

This is a moving portrait of an epic journey told in an intimate way. It gives voice to refugees in a manner that is fairly unusual in documentaries.

It is also crammed full of information about every aspect of the situation.

The second and third episodes promise to continue in the same way. This is riveting and harrowing viewing but as a record of a human situation unique in modern times it is well worth watching.

The police killing of Mark Duggan in 2011 rekindled the tensions that have existed for generations.

This enjoyable new film by George Amponsah reflects on the riots it sparked and explores the lives of Mark’s friends Kurtis and Marcus in the years following.

Despite the emotionally charged topic the film has some genuinely funny moments and highlights the police racism faced by black people.

Marcus was charged with instigating the riots—he serves 32 months in prison during the course of the film.

It also tracks Kurtis’ difficulties in finding work due to earlier convictions.

Lack of opportunities was one of the driving forces behind the riots.

Kurtis describes how difficult he is finding it to stay “straight” when he is denied job after job because of his record. He says he and his family would be better off economically if he returned to pushing cocaine.

Through Marcus and Kurtis, we get a glimpse into a system that is stacked against them from birth because of racism and class.

We see them trying to navigate the system while continuing their fight for justice for Mark.

However the film does not offer any solutions.

The irony is that changing yourself does not work when you live in a rotten system.

Kurtis’ happy ending is being able to clean toilets in a minimum wage job. He previously had to commute to Norwich because it was the only place he could get work.

This is not a world we should accept—it is not us as individuals who need to change. It’s the racist system we live under that we have to fight.

The price of PFI

Fat cats who trousered billions of public money have stitched up PFI contracts to keep us paying when it all goes wrong.

The rule seems to be the more fundamental the buildings are, the worse deal the public gets.

Teams of lawyers negotiate in secret to let the corporate vultures get away with as much as possible.

Politicians claimed that PFI would provide high quality buildings and the state paid contractors a premium for that over decades of repayments, instead of paying building costs upfront.

But the programme questions why public bodies are paying more than they bargained for.

Jess Thom has Tourettes, a condition that makes her say ‘biscuit’ 16,000 times a day. Her unusual neurology gives her a unique perspective on life, one she’s about to unleash on the world.

Geranium bashing and penguin group sex may or may not feature—no two shows can ever be the same. Thom is neurologically incapable of staying on script, and that’s when the fun begins. 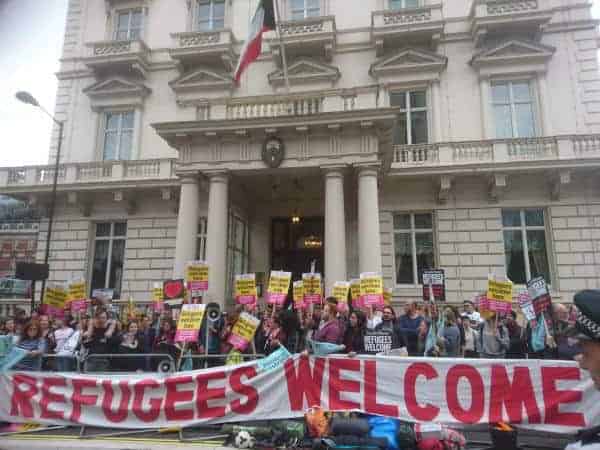 Convoy to Calais blocked, but still a big success