This article is over 4 years, 11 months old
Months of protests have rocked the northern coast of Morocco, triggered by the gruesome death of fish seller Mohsin Fikri last autumn. Mehdi Rafiq explains the deep roots of discontent in the region.
By Mehdi Rafiq
Downloading PDF. Please wait...
Monday 04 September 2017

For more than ten months the Rif region on Morocco’s northern coast has been aflame with protest. On 20 July baton-wielding riot police used tear gas to chase hundreds of chanting demonstrators through the streets of the provincial capital Al Hoceima, as they gathered to call for the release of political prisoners and for an end to the clampdown. Over the following days thousands took to the streets of neighbouring towns in the region in angry demonstrations condemning this latest round of repression.

This popular movement has not remained confined to the Rif region, despite attempts by the Moroccan regime to isolate demonstrators through an intense media campaign, accusing it of serving foreign agendas that threaten the “security and stability of the kingdom”.

The monarchy has also portrayed the Rif activists as separatists because protesters were raising flags used by the resistance movement to Spanish colonialism. Yet tens of thousands of demonstrators came out on the streets of the capital Rabat on 11 June in solidarity with the movement in the Rif, following a wave of arrests targeting its leading figures in late May. Although some of those arrested have since been released, including the singer and student activist Salima Ziani, who is known as Silya, key leaders such as Nasser Zefzafi of the Hirak movement are still facing trial on serious charges.

The immediate trigger for the uprising was the killing of a young unemployed man, Mohsin Fikri, who was trying to make a living by selling fish. In October 2016 municipal officials in Al Hoceima seized his wares and, as he tried to retrieve them, started up the mechanism of a bin lorry, crushing him to death. Fikri’s horrible death sparked massive protests across the country, and not only in the Rif region itself, where his fate became a symbol of people’s anger at a social crisis which has deep roots.

The Rif is one of the regions most affected by the current economic crisis in Morocco. Small trading enterprises dominate the city of Al Hoceima whose 6,000 businesses and shops have been damaged by the trade recession. The craft industry only provides work for around 10,300, while there are only around 1,000 jobs in industry for a population of 400,000.

The fishing sector provides 3,500 jobs and is dominated by traditional fishing, making productivity very weak compared to other regions, despite 72km of coast and two ports in Al Hoceima and Cala Eris in Bani Bufrah. In 2013 less than 10,000 tons of fish was unloaded at a value of 110 million dirhams, compared to four times as much in Tangier and Tetouan. In addition, the fishing industry suffers because of foreign exploitation of the sea, especially by Spanish fleets and monopolies.

Although the Rif area is characterised by agricultural activity, the area of arable land is relatively low, comprising 171,000 hectares which is half of the area of arable land in the Taounate region, north east of Fez. Meanwhile property developers have been taking over agricultural land in the plain of Nekour in the Al Hoceima region, leading protesters to demand a halt to building on the farmland there. Arable land is constantly shrinking due to the nature of the terrain, while the poor-quality soil degrades rapidly as a result of high levels of erosion.

The banking and financial sector remains one of the most important activities in the region, given the commercial popularity of the region, especially the city of Nador, due to the informal trade with the city of Melilla, which remains under Spanish occupation, and the remittances of migrant workers from the Rif region. However, the contribution of the banking sector to the development of the region remains non-existent, only providing consumer loans and financing certain limited individual activities. It is the major Moroccan cities such as Casablanca and Tangier which attract most investment in the region.

Tourism suffers from underinvestment in the Rif due to weak transport infrastructure and the isolation of the region.

The economic backwardness of the Rif is a result of Spanish colonisation as well as the economic politics adopted after independence by the Moroccan state, which deepened class and geographical disparities.

The Spanish colonial authorities were mainly interested in exploiting the region for its raw materials, especially iron, which was produced in the Eastern Rif and sold to European industries. Germany was the biggest importer and in return supplied General Franco with arms, materials and processed food. During Franco’s rule the Rif quickly became an important timber exporting area.

Meanwhile, land-grabbing by Spanish settlers and the emerging local bourgeoisie forced local peasants to emigrate to the zone of Morocco under French occupation, or join the Spanish Army. The Spanish authorities directed the bulk of their budget towards the costs of the military occupation, building few railways, roads or public infrastructure.

The economic policy adopted by the Moroccan state after independence in 1956 deepened the geographical and structural disparities between the Rif region and the rest of the country. The colonial division of Morocco between Spain and France has led to the concentration of economic activity and investment in the former French zone on the Atlantic coast stretching from Quneitra to Casablanca, and the marginalisation of the rest, especially the mountainous areas, which require huge investment in infrastructure and public utilities.

The Rif has experienced systemic marginalisation by the state. Investment in development projects has largely been a political response to emergency situations, such as the popular uprising in 1958-9 or the earthquake which hit the city of Al Hoceima in 2004. Most of these schemes have been quickly abandoned. Decades later nothing has changed and the protesters of the Rif raise the same demands while the state continues to rehearse the same script, promising investment in economic development.

This decades-long process of marginalisation means there are few job opportunities for the tens of thousands of young people in the region. In 2012 unemployment reached 46 percent among middle and high school graduates, almost double the national average of 26 percent. No wonder young people have been leading the demonstrations and protests across the region.

This is why social and economic demands have been at the heart of the protest movement. The Rif population is demanding employment, investment in health, education, drinking water, reductions in the price of water and electricity, the construction of roads, a fair distribution of wealth, preservation of marine, water and forest resources, and access to agricultural land for small farmers.

Such demands cannot be answered within the current economic system. Their achievement requires a radical change in the policies followed so far. The mere expression of these demands has also required the development of a genuinely democratic movement to mobilise the victims to demonstrate and protest. The many popular committees in most of the region’s cities and towns have played a crucial role in continuing the uprising. These committees serve as a democratic platform to discuss the protesters’ demands with the local population and organise resistance to police repression.

Thus the movement has called for the removal of security check points in the region and respect for democratic freedoms to protest and organise, as well as demanding the release of political prisoners and justice for those killed by the police.

The demands of the Rif movement find a powerful echo with Moroccan citizens outside the region, who have experienced both defeats and victories in protracted social and political battles over recent years. These have included the struggle of the city of Tangier against the Amandis colonial company and the high cost of electricity bills, strikes and protests by medical students and trainee teachers, and the mass mobilisations of the 20 February Movement, which erupted at the height of the Arab revolutions in 2011 to demand political and social reforms.

Yet the Rif uprising also raises serious questions. Despite the deep hopes it has created in the hearts of all those who yearn for a free and democratic Morocco, it seems to lack again, like previous popular battles, a political force that is able to blend political with economic and social demands. The way forward depends on the capacity of the revolutionary left to rise to this challenge. 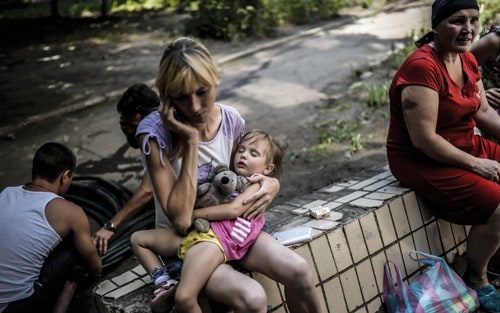 A socialist case for Ukraine against imperial rivalry and nationalist division