A further five million including disabled people, Romani people, LGBT+ people and political opponents perished at the hands of the regime.

Such staggering horror seems almost beyond comprehension, and some people have said there can be no real explanation.

But if “Never Again” is to be more than a slogan, we have to understand what paved the road to Auschwitz and the other death camps.

Throughout history, plenty of right wing, reactionary rulers have perpetrated mass killings. The Nazis were racist and imperialist to boot, but their fascist regime wasn’t just another form of authoritarianism or military dictatorship.

Fascism grew after the First World War, fuelled by a social crisis and the rise, but failure, of workers’ revolution to break through. Fascism built a mass movement that could smash working class organisation and democratic rights.

If tensions rise, the ruling class can always turn to “safe” opposition parties or, if necessary, repression through the police and military to keep the working class in check.

But when the ruling class can see no other way out of a profound crisis, it will dispense with democracy.

In the 1920s workers movements in Italy and Germany had come close to taking power and it would take more than the police—or even a military dictatorship—to stop the threat.

If the ruling class wanted to smash these working class movements, they would have to look to another mass movement to do it.

In the 1930s, the Russian revolutionary Leon Trotsky argued that fascism was a “razor in the hands of the class enemy”.

“At the moment that the ‘normal’ policy and military resources of the bourgeois dictatorship, together with their parliamentary screens, no longer suffice to hold society in a state of equilibrium,” he wrote,“the turn of the fascist regime arrives.”

In the 1928 general election it polled 2.8 percent and won just 12 seats. Just two years later after the Wall Street Crash in 1929, the Nazis became the second largest party and then topped the poll in 1932.

By 1933 the Nazis’ electoral fortunes were waning, but fascism has never taken power through elections.

The ruling class in Germany had already abandoned democracy in all but name by 1930. It had ruled through the “cabinet of the barons” with a series of right wing politicians and top generals using presidential decrees.

But they had been unable to deal with the growing crisis and the threat of working class revolt.

In the end, the ruling class relented to the Nazis’ demands and made Hitler chancellor prime minister as a “necessary evil” to return order.

At that particular point the Nazis’ aims and the interests of German capitalists coincided—to crush the working class.

Read about the Holocaust survivor and longstanding anti-fascist campaigner:

Some have argued that this shows the Holocaust and other Nazi crimes can be explained as simply representing the interests of the German capitalist class.

It’s certainly true that some big firms, such as chemicals conglomerate IG Farben, profited from the Nazis’ forced labour schemes during the Holocaust.

IG Farben had a purpose built factory at Auschwitz-Monowitz and used Jewish slave labour from the camp.

But the Holocaust cannot be explained simply in economic terms.

If the Holocaust was an extension of capitalists’ interests, why did the Nazis seek to exterminate Jewish people instead of using them as slave labour?

At the height of the Second World War, the Nazis diverted precious military resources into carrying out their “Final Solution”.

Even when the Nazis were losing to Russia on the Eastern Front, they ploughed resources into the genocide.

While the ruling class can turn to fascism, the Nazis were never just a puppet of the ruling class. The Nazis’ social base was rooted in what Trotsky called the “petty bourgeoisie”—small time capitalists, shop owners, farmers.

They lacked both the wealth of the capitalists and the power of the working class to fight back to defend its interests.

This meant that the “petty bourgeoise” were squeezed between big business and the working class. While Nazism promised capitalists to crush the working class, it also promised to lift up these middle class layers.

This soon started to run up against a problem. The Nazis’ street-fighting wing—the “Brownshirts”—had argued for a “second revolution” after Hitler had taken power in 1933.

But for all their rhetoric, the Nazis had no intention of challenging capitalism and the Brownshirts’ talk was worrying capitalists.

Hitler wiped out their leadership in the Night of the Long Knives in 1934, but this didn’t solve the contradiction.

Trotsky had referred to the Nazis’ middle class base as “human dust”—in order to glue it together the Nazis increasingly relied on antisemitic ideology. 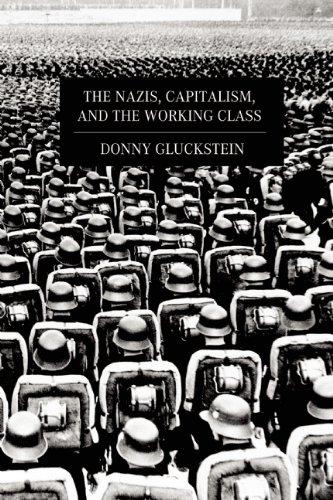 This is crucial to explaining the Holocaust. The ruling class turned to the Nazis, and the Nazis held their base together through antisemitism and, eventually, genocide.

The Nazis’ antisemitism wasn’t unique and was built on a long history of Jewish persecution.

What was unique was its industrial-scale killing and the purpose of this antisemitic ideology—to mobilise and hold together their mass movement.

Again today there are forces that want to emulate the Nazis and feed off wider racism within society.

We have to take them on—and smash the rotten society that gave birth to them to make sure the horrors of the Holocaust never happen again.

For more read Marxism and the Holocaust: plumbing the depths by Alex Callinicos. For meetings and events around Britain to mark Holocaust Memorial Day 2019 go here